From Tequila Shots to Jesus (Things I Hope for my Son)


This wasn’t the post I was going to write today. But it’s the post that came. It’s something that has been marinating in my mind for a while now. And today I had the chance to say it out loud in one of those conversations that feeds your soul. The kind of conversations that I crave, like food, but that often get missed in the day-to-day discussions of baby sleep patterns and diaper changes.
I have been thinking a lot about religion in the last few months. If you know me, you might think that this is an unexpected admission. Religion and I have a complicated history. We had a rocky beginning when, at the tender age of five, some well meaning religious neighbors told me I was going to Hell because my organized-religion-less parents had failed to baptize me. That kind of thing can really mess a kid up.  Especially when that kid then watches a movie where dead children go to live with Santa Claus because they are too young for Heaven or Hell and then hopes that she will die before the age of ten so that she can live at the North Pole instead of in the fiery pits of the Devil’s Kingdom.
So that happened. And it shaped me in profound ways. Then I became a lesbian and became the target of many people who stand behind the Bible in an attempt to espouse hate – ignoring the passages that focus on love and clinging to the passages that seem to justify condemnation. My wife and I have received a number of packages from her Jimmy-Swaggart-obsessed Granny warning us of our eternal damnation. Many times small, neatly wrapped, packages have arrived at our door with pamphlets and ripped magazine pages containing highlighted passages such as:

“Marriage is scorned. How many people today are simply living together without the benefit of marriage? Fifty percent of our homes are breaking up. The other day two homosexuals had their sordid relationship 'dignified'  by a 'marriage ceremony' performed by (would you believe?) a preacher.”
“The facts are these: God made man and woman. He made man to be the head of the family. He didn't intend for him to be a dictator or a tyrant, but He did ordain him head of the family. Ladies, whether you like it or not, this is God's plan. Any other order will frustrate the laws of God and will bring total destruction to those who promote such a system.”
“Today we have changed the names, but we haven't changed the problems. The harlot has now become the party girl; the drunkard is an alcoholic; the sex pervert is gay or homosexual. I'm sick to death of words like 'gay' being used to amass respect for people who don't deserve respect. Why don't we use words descriptive of their chosen lifestyle, such as pervert, queer or faggot? There are plenty of appropriate words branding these people for what they really are.” 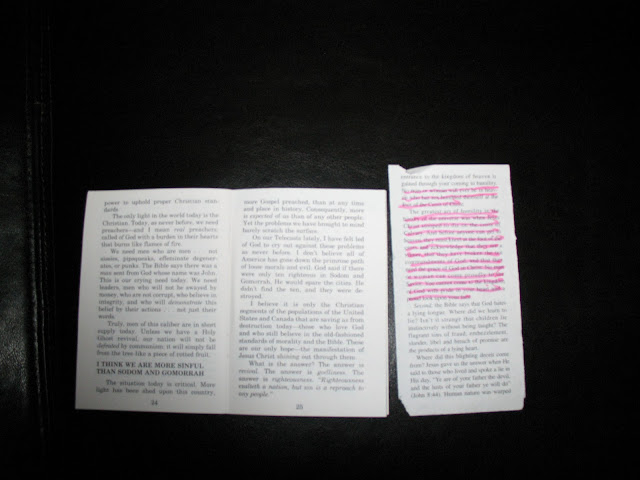 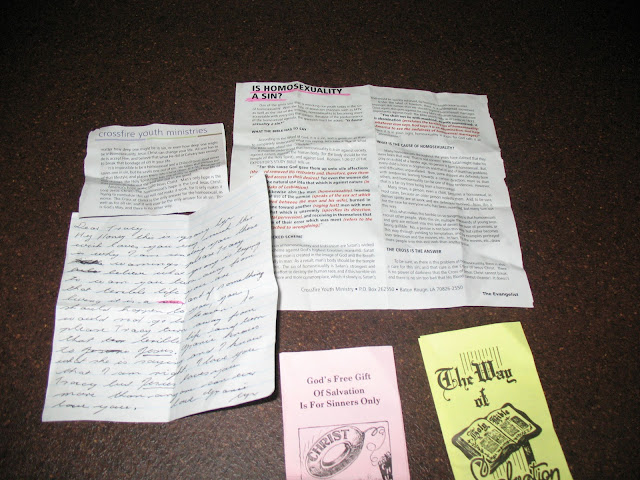 So that happened too. And it shaped my understanding of organized religion.
But lately I’ve felt a change. I’ve felt an urge in me to understand the bigger picture. I’ve felt an urge to pray even though it’s not something I’ve ever done.  You see Mac has two moms with a very complicated relationship to religion. One of them is a “recovering Catholic” who is, at most, agnostic. The other was raised religion-less and has worked hard to convince herself of the possibility of Heaven while making Hell feel utterly unbelievable. But I can’t help but want him to have faith. I want him to believe in something bigger than himself. I want him to pray and to trust in God. I want him to have the kind of security in the bigger picture that his moms lack.
These things have been banging around in my brain for months now. I’ve googled “gay friendly Ottawa Church” and I’ve thought out my hopes and fears for my son. But I haven’t said it out loud much. And then today, I am sitting cross-legged on the floor, drinking coffee with one of my oldest and dearest friends as Mac kicks and squeals on the blanket between us. Out of the blue she mentions that she’s been thinking about going to church lately. Raised Catholic, but not practicing, she wants her daughter to know of God and feel his love and guidance. We both stared at each other for a moment. Each completely shocked by what the other was saying. We had moved past the pleasant chat of baby care and life’s complications and into the meaty, satisfying, conversation that all new moms need. We talked about what we wanted for our children beyond access to sports and a good education. We talked of the people we hoped they’d become while realizing, humbly, that our influence on their personhood will be both huge and miniscule in a myriad of ways. 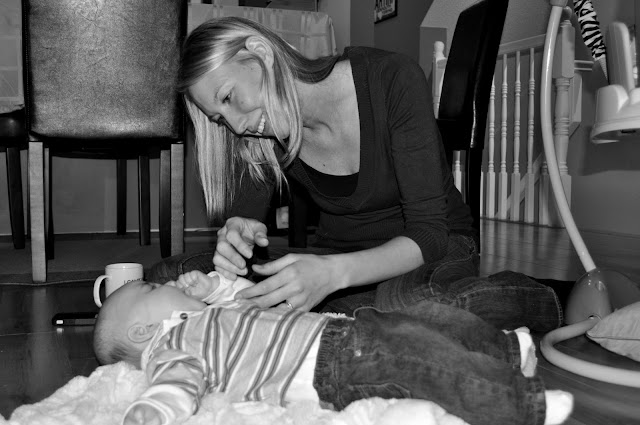 We finished the conversation with an incomplete plan left hanging in the air. Yes, we will explore church for our children. The how and the when have yet to fall into place. And as she left I couldn’t help but smile at the amazing ability of true friendship to twist and grow as two people wander through separate lives. Ten years ago we had conversations that fed my soul too. They were about the world and the future and what we could do with it. But more often than not our conversations centred around tequila shots and the search for post-bar-poutine. From tequila shots to Jesus. That’s quite the leap.

Email ThisBlogThis!Share to TwitterShare to FacebookShare to Pinterest
Labels: aunts and uncles not by blood but by love, gay stuff, homophobia, parenting, religion, Things I Hope for my Son