Amanda Todd and the Culture of Sexism

Several years ago I taught a university class on the history of feminism. My students, mostly twenty year olds under an extreme amount of pressure to perform academically, struggled to grasp the concept.  Feminism resides in the deepest part of my heart. When I learned to speak its language it gave me a lens through which I could understand my world. And ultimately it lead me to myself. I did my best to teach my students about feminist heroines while simultaneously questioning the validity of valourizing individual women as representitive of complex communities. But my students had glossy eyes. The decade age gap between us became apparent. They scrunched up their noses at the mention of a glass ceiling. There were more female than male students on campus and the concept seemed outdated to their minds. Eventually, one of the students tilted her head to the side, and with a great amount of careful consideration, asked "do we still need feminism now that men and women are equal?"

This week a Canadian teen took her own life.  The tragedy of her story is beyond measure. A seventh grade girl was pressured to show her breasts on a webcam. She did. What followed was years of harassment and bullying that ultimately lead her to take her own life.

Her name was Amanda Todd and she is on the tip of everyone's tongue today. On the internet faceless people argue back and forth about what caused her tragic end. Some argue that kids will be kids. And that kids are cruel. Implying that Amanda should have been stronger, tougher, more resilient. Others aim their digital pitch forks at the bullies in question. String them up! Lock them away for life! While still others place the blame squarely on the shoulders of the new world of social media that allows our virtual connections to remain indefinitely in cyberspace.

But what's conspicuously absent from this dialogue is the culture of sexism that has surrounded poor Amanda Todd. What happened to make a 7th grader place the value of her existence on her appearance? Why did the flattery of "you are stunning" convince her to bare her chest? And, more than that, what is up with a culture that can simultaneously sexualize and obsess over breasts while shaming any woman who dares to bare them?  The Madonna and the Whore complex is apparently alive and well in the world of 7th graders. 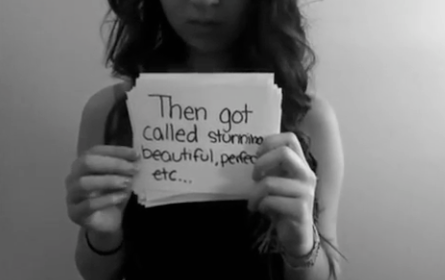 After changing schools and friends and lives more than once Amanda Todd then started to text with a boy. And eventually found out that he had a girlfriend. Thinking that he had genuine feelings for her she agreed to meet with him while his girlfriend was out of town. They "hooked up." The whole thing was a set-up and his girlfriend subsequently beat Amanda up as a crowd of teenagers looked on and cheered. During the fight Amanda refused to blame the boy. She didn't want him to get in trouble. She thought he liked her. 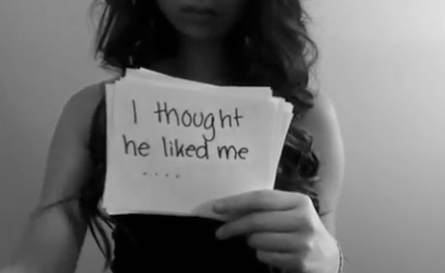 We focus on the bullies in this story because they are tangible. We can point them out and place the blame on their shoulders. And, please, do not get me wrong - they deserve a whole lot of blame. What they did was disguising and despicable. But what does it say about the rest of us that we aren't questioning the larger pattern of behaviour where young women remain subservient in an attempt to attract and keep men? Does it begin with old assurances of "oh, he pushed you on the playground, he must really like you!"? How do we expect our young women to grow into confident adults with such conflicting information?

And, seriously, can someone please comment on the double standard!? This boy cheated on his girlfriend. He was an equal partner in the "hook up." But his peers placed all of the blame on Amanda Todd.

Most people will look at this story as tragic. They will shed a tear or two and move on assuming there was nothing they could do to prevent something similar from happening. Those of us with young people in our lives may reach out to them to talk about bullying and suicide. Please have those conversations, they are essential. But while we are at it can we please also bring the culture of sexism into the conversation? Can we examine our own notions of gendered expectations, promiscuity, and misogyny? Can we take responsibility for the culture we have created that allowed all of these events to occur?

As I cried through Amanda Todd's heartbreaking video I couldn't help but think back to my student. The one who didn't see the modern day value in feminist culture now that "men and women are equal." The answer to her question is yes - we do still need feminism. We need it badly.