Before I was a Mother

We all have a list - before we become parents. A list of things we swear we will never, ever do. Or promises that we always will. Usually that list comes in reaction to the things our parents did, or didn’t do, and the ways we want to replicate them or put an end to a pattern that no longer works (or never did). We all keep that list. Some of it is etched into our hearts – forever permanent and unwilling to be altered. Some of it is more elastic and allows for gentle and swift bends and changes. Before we are parents we cling to that list like a lifeboat. We chant to ourselves that We Will or We Won’t because the concept of caring for a new life is so entirely overwhelming and filled with emotion that we feel the need to hold onto some part of the rational world for fear of being sucked in. For fear of becoming our parents. Or out of fear that we won’t.
Some of my I always wills have stood the test of time (and by time I mean the mere five months of my son’s precious life thus far). Before I was a mom I promised myself that I would always listen to my child. That I would make the time to read to him and play with him and treasure the small moments which escape too quickly. Five months have already afforded me more small moments than it feels like my heart can contain.
But the other list, the I will nevers, hasn’t fared as well. I swore I would never co-sleep. I may never have said it out loud, because I was afraid of eating my words, but I thought it.  And while I’m not a regular co-sleeper now there are just some nights that call for it in our house.  And as I lay him down next me and our heartbeats seem to talk to each other, beating out morse code for love and family and security, it feels just like it did for nine months when he was making his home inside of me. Only it is substantially more comfortable with him on the outside.
Before I was a mom I swore my home would never be decorated with brightly coloured plastic. As we prepared for Mac’s arrival and my mom kept trying to feather our nest with toys that seemed to only come in vivid colours (which clashed greatly with my usual palette of earth tones and black and gray) I protested with more ferocity than I employed as a teenager fighting her curfew. I decorated my son’s room with a contemporary New York City theme and told his grandmother that he would just need to learn to have adult tastes from birth. 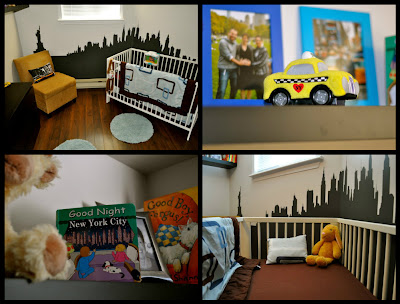 I would have never believed that the monstrosity pictured below would reside proudly in our living room. But gosh, if you could see his smile, and the way his whole face lights up as he bounces in it, you’d see why it has become an essential piece of furniture in our  home. 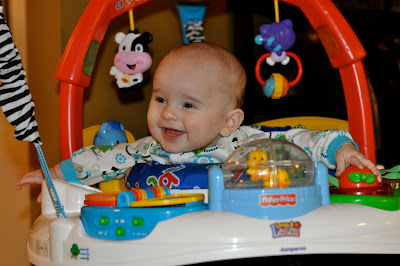 I swore I would never be that mom who let her baby crawl all over her like a jungle gym. And yet, as I sat on the couch yesterday, the baby sitting on my belly, his legs kicking my boobs, one hand reaching up to poke a finger in my nose, the other exploring the edges of my teeth, I barely noticed the intrusion on my personal space. And I realized that the only time I should say I will never is if it is followed by say never.
But the truth is that it’s hard to make a pre-parent list and stick with it because the emotion that comes when you become a parent is unpredictable. I was asked recently why I began blogging. And I answered honestly that part of me was just so overwhelmed with the love I felt for my son, and the realization that other parents (including my own) felt it too, that I needed a space to write about it. And I did in my first post. I can remember those first moments of being conscious of that love. It’s a love that is like no other and I didn’t expect that. I love my wife. I love her with every ounce of my heart and will be forever grateful that our paths crossed and that she chose to love me for the rest of her life. But I didn’t love her the first moment I saw her. She had to earn it. She had to love me back. She had to work to capture my heart (even though it’s something that seems so effortless these days). Mac, on the other hand, didn’t need to do anything. He simply needed to exist.
I can remember becoming aware of that love and wondering why everyone wasn’t talking about it. If mothers and fathers all over the world loved their children THIS much how were they not screaming it from the rooftops? How were there not love letters written in the sky and breaking news stories entitled father loves his child THIS much! Surely THAT was newsworthy!
And then I realized that I had just never before seen the world through the eyes of a parent. Because everywhere I look now I can see parents loving like that. When my best friend’s five-year-old daughter reads the words “baking powder” without help and her mother’s smile beams with the kind of pride you would expect from the mother of a Nobel Peace Prize Winner – she is loving that much. And when her husband’s pockets are filled with hair barrettes, collected coloured stones, and kitty figurines; and when he is as likely to rhyme off the names of fairytale princesses as Maple Leaf draft picks – he is loving that much.


When my friends move with determination and passion across the department store to buy boys’ briefs for their daughter – they are loving that much. And when my own parents drove six hours (each way!) in the span of a single day to see my pregnant self one last time before I moved from being simply their daughter to the mother of their first grandchild – they were loving that much. 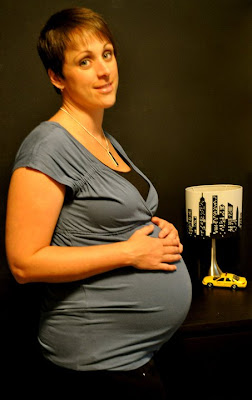 When my brother was lost and my mother (metaphorically and literally) kept her porch light on, always hopeful for his safe return and the power to guide him when the rest of us had turned our lights off – she was loving that much. And when my wife's mother, already diagnosed with inoperable lung cancer, held me tight and told me how happy she was that I loved her daughter – not asking me to be good to her baby after she was gone but simply being grateful for the knowledge that I would – she was loving that much.
It turns out that loving this much isn’t particularly special or unusual. You can’t walk out your front door and move 100 feet without running smack-dab into a parent loving his/her child like that. People are born every day. It’s common and ordinary. But before I was a mother I didn’t realize the miraculousness that existed in the ordinary.

Email ThisBlogThis!Share to TwitterShare to FacebookShare to Pinterest
Labels: aunts and uncles not by blood but by love, grandparents, loving THIS much, parenting