Turning my Reproductive Organs into Baby-Making Over Achievers

This post is part 7 in a series entitled Mac: The Prequel in which I tell the drawn-out story of how my wife and I met the father of our child online and eventually created a child with him. If you are new here you should probably start by reading the previous entries. Seriously, this will all make more sense if you do. Just click here. Also, if you want to read Andy’s version of the events you can click here.

All caught up? Excellent. We can move on then.

So we were walking along a dirt path in Montreal and Andy finally turned to us and asked when we thought we might be ready to start trying to make a baby. I had to hold myself back from screaming NOW! WE ARE READY NOW! DON’T YOU HEAR THAT LOUD GONG THAT IS MY BIOLOGICAL CLOCK? Instead, I just gave a laugh meant to imply that I was somewhat kidding but also potentially serious. And then I said that, actually, I would be ovulating that weekend.

Andy returned my laughter but didn’t take the bait. He wasn’t days away from ovulating and the urge to PROCREATE.RIGHT.NOW wasn’t as strong for him. Also, he’s responsible. Which means that he wanted to remain celibate for the allotted amount of time to ensure his negative HIV status. Which is totally fair and very gentlemanly.

But he assured us that he was interested in the prospect of creating human life with us and that he would be ready soon. We were happy with that outcome and drove home with very large smiles on our faces.

And that’s when I went from obsessively trying to increase my fertility to… well… obsessively trying to increase my fertility even more. Andy chivalrously offered to come to Ottawa for the inseminations. Which was awesome because flying to New York City and then doing the sperm hand-off in a hotel while worrying about bed bugs, or in his apartment while worrying about… well… how weird it would be have my wife inseminate me with sperm from someone I met online in his apartment, would not have ensured the peaceful, calm, environment needed to allow my cervix and fallopian tubes to relax and allow the little swimmers in.

So that was nice of him. But getting his sperm from NYC to Ottawa, Ontario wouldn’t be cheap. To mitigate that cost I attempted to turn my reproductive organs into baby-making over-achievers. And when Andy asked if there was anything he could do to help his swimmers I was more than happy to offer him a list of “suggestions” (I won’t get into that here, because that is his tale to tell, but maybe he’ll elaborate when he catches up to this part of the story).

I made use of the OvaCue Monitor Bundle which predicted my ovulation weeks in advance with surprising accuracy.  The monitor is basically a small gadget with two prongs. One goes in your mouth each morning and reads your hormone levels. The second goes in your vagina (I just literally spent 30 minutes contemplating on what word to use there – vajajay? Nether regions?) at night and confirms when ovulation has taken place. Then the little screen on the gadget shows you a calendar with colour coded boxes (light blue = not fertile, dark blue = fertile, pink = ovulating). It couldn’t be easier. It looks like a little GameBoy console so Tracy took to calling it the Vagintendo. Which is precisely why I married her. 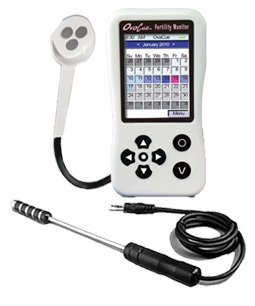 In addition to ovulation tracking I also took a variety of vitamins and supplements. A few of these included Coenzyme Q10 (to help with egg quality) and Vitamin B6 (to help the luteal phase). I also took FertilAid for Women  and FertileCM supplements. The FertilAid is a prenatal multivitamin with vitex in it. The FertileCM is a supplement with L-arginine in it that helps to increase cervical mucus (my wife is likely cringing as she reads this. God Kristin, do you have to use the word mucus on the internet?)* I also drank two glasses of FertiliTea a day.

Our trip to Montreal to meet Andy was a week before Pride in Toronto and we made a last minute decision to attend, figuring that it would be our last chance to party before parenthood.  We partied it up like rockstars (or like the 20 year olds we were partying with – one of whom said that we were the kind of lesbians she hope she’d be when she grew up… if that doesn’t make you feel old I don’t know what does!). 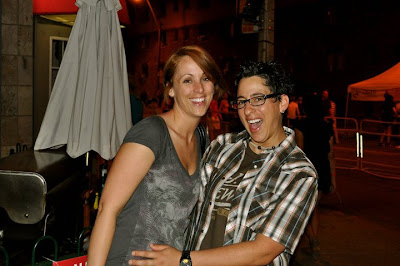 And then I forgot to insert the “vagintendo” before bed and had a total melt down.  I apologized profusely to the Ovacue in the morning and it was all relax Kristin. We can totally deal with one missing day. Which was awesome. And while I was busy turning my reproductive organs into a five star resort for sperm, Andy was busy making sure that said sperm was HIV negative. Which, as you likely already know, it was. And more on the big insemination next time!

**** Please note, this post was sponsored by Fairhaven Health but all opinions and claims are mine and mine alone.  I did, truthfully, use the OvaCue Monitor Bundle, FertilAid for Women  and FertileCM supplements as well as the FertiliTea with great success long before I began this blog. Also, if you click over to Fairhaven Health from this site and make a purchase within 30 days I will earn a small commission on your order. ****

Please take a moment and click on the image below. Doing so will register a vote for me on Top Mommy Blogs.