Sure you can have a pony. Would you like cake with that?

As the last hot days of summer come to an end and the landscape is painted with beautiful oranges, yellows, and reds, our photography business is busier than we could have ever anticipated. Which is amazing. Like bust out the champagne and have a party to celebrate amazing.

Tracy and I shoot weddings together. Which means that we exhaust our childcare options with Saturdays that start at sun-up and go late into the night. So when we have additional shoots in the evenings and on Sundays it is just me who goes. Tracy stays home with Mac and gets all that fun evening and weekend time when rules are far and few between and the world is their oyster.

And it's starting to show.

I carried this child in my stomach for nine long months. He sat directly on my sciatic nerve for two of those months. But all of a sudden he likes her better. And we aren't talking he'd prefer her to put him to bed better. We're talking "Nooooooo Ma! WANT MO!" screaming until he's blue in the face better. And as he gets over this last bout of asthma we aren't supposed to let him get too upset so he wins. And she puts him to bed. And she pours his coconut milk. And I'm not even allowed to touch the remote. No Ma, Mo do 'mote. I mean, not that it's a competition or anything. Except when it is. And I'm totally loosing.

So Sunday morning rolls around and the only commitment I have is a family shoot at 2 PM. So with this rare free weekend morning I decide that I'm going to take Mac out for breakfast. But he wants none of it. Mo. No Ma. Mo. He's crying and I'm pleading and Tracy is trying to convince him that I'm not the monster he seems to think I am while trying to control her self-satisfied smirk. And it sucks.

So I convince him to leave the house with me by promising a visit to the choochoo instead of breakfast. But once in the car he still cries the whole way there. We head to the train set at Chapters (which is like Borders for those of you in the US). That seems to make him forget about the other half of his mothering duo.

And then we finish at the train and his eyes fall on the animal figurines for sale. He has this strange obsession with the over-priced animal figurines that you can find in places like Chapters and Michaels. He wants a pony. So I buy it for him. And then he wants another. And I buy that too. A new blue parrot from the craft store next door? Sure thing kid. Forty dollars later we are walking out of the store and he's clutching his loot to his chest. 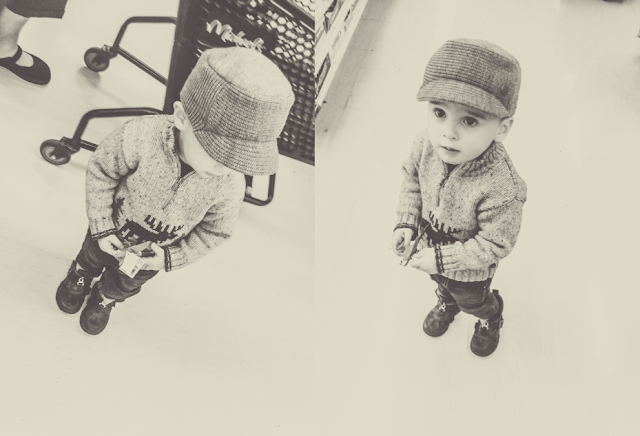 I'm certain that I've made up for my parenting absences.

And then we return home and it's all he can do to get up the stairs without dropping his new friends so that he can show them to his favourite mom. Who, by the way, is not me.

Lesson of the day? You cannot buy your children's affection with plastic horse figurines. I'll try cake next. Unless you have a better suggestion.
Posted by Mondays with Mac at 15:52