This new acquisition of language is the coolest thing to watch. The nouns are the easy part. He learned them quickly and only needs to hear a new person, place, or thing once before it is committed to memory. The verbs and the adjectives are following quickly behind.  It's not the kind of thing you teach, really. You just talk and hope that some of it sinks in but you never really know when it will. Until it has. And that's such a cool moment.

Mac lives in Ottawa with my wife and me but his dad lives in New York City. At two and half years old he has seen his Dad a dozen times or so. For the last year he has understood Dad as a noun. That guy who comes to visit every few months, the one with the scruffy face and the phone filled with videos of cats and horses on demand, his name is Dad. And to my toddler he's a pretty stellar guy. His visits produce donuts. And he lies on the floor to play. He looks for opportunities to wear matching outfits and Ma (that's me) takes a lot of photos when he's around.

It's early on Saturday morning and Mac is perched on his knees at the kitchen table. My wife and I, bleary-eyed, are curled into the couch drinking luke warm coffee. Andy is at the table with Mac, alternating between bites of fruit and crackers and moving trains and horses back and forth.

Andy holds Mac's attention with the proficiency of a six foot tall purple dinosaur. My wife and I take those moments to let our son's other parent do the parenting. My head rests on her shoulder as the boys chatter across the room.

Unaccustomed to our cold Canadian winters, Andy excuses himself from toddler play and heads to his room for a sweatshirt. Mac looks up from what he's doing and scans the room.

He smiles a proud smile. He's figured out the possessive pronoun. That guy in the other room, the one with the scruffy face and the phone filled with videos of cats and horses on demand, he is not just any old dad, he is Mac's Dad.

Just two little letters that fall out of his mouth but they imply so much more. 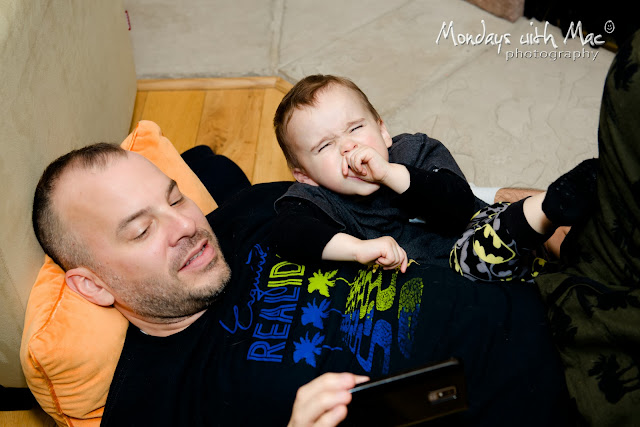