Did you see the episode of Friends when Rachel realizes that the baby is due any day and although she read everything she could about pregnancy she forgot to read about actually taking care of a baby? We had that moment too. Somewhere around 35 weeks when we realized that we were only two weeks away from being considered full term. So I pulled out the baby care books that generous people had lent and gifted to me and started reading. But the thing about reading parenting books when your parent status is still pending is that it all seems entirely theoretical. Tips and tricks on how to soothe a crying baby seem redundant when you are still convinced that you will soon be giving birth to a baby that sleeps through the night from day one and is so at peace with his new life and amazing moms that he will rarely, if ever, cry.
So I put the books away and my wife and I bought the DVD The Happiest Baby on the Block by Harvey Karp. Hundreds of written pages on turning an unhappy baby into a happy baby just weren’t enticing enough for us to sink our teeth into but we figured we could give an hour of our lives to at least watching the Coles Notes version. We watched as Harvey Karp described the first three months of a baby’s life as “The Fourth Trimester.” He explained that babies actually need a fourth trimester to finish growing before they are ready for the world. And that since they come out of our bodies after only three it is the parents’ job to make the baby feel as if he is still in the womb for the first three months of his life. He then gave a lot of (as it turns out incredibly useful) suggestions on how to make your baby feel like he is still in your womb. We took mental note of the tips on swaddling and shushing and on-demand feeding but mostly we thought that the term “fourth trimester” was little more than a cute play on words.
And then Mac was born. The first two weeks were spent in sleepy bliss as the tiny, warm, newborn was passed from adoring family member to tear-stricken friend and back again. We woke him every three hours to eat and he was asleep again before finishing his meal. And then…. He woke up.  And cried. A lot. All of a sudden the lovey-dovey-snuggly Look! We made a baby! time was over and our days and nights were spent minimizing the crying. If he was awake he was either crying or on the verge of it. And he fought naps like they were about to take him hostage in enemy territory. He quickly made it clear that he would only sleep while we walked. So we put him in the carrier and we walked. Just like my walking had lulled him to sleep when he was in utero, being snuggled close to my chest in the Ergo carrier convinced him to visit dreamland on the outside. Some days I walked for four hours. And then Tracy would get home from work and we would walk for two more. 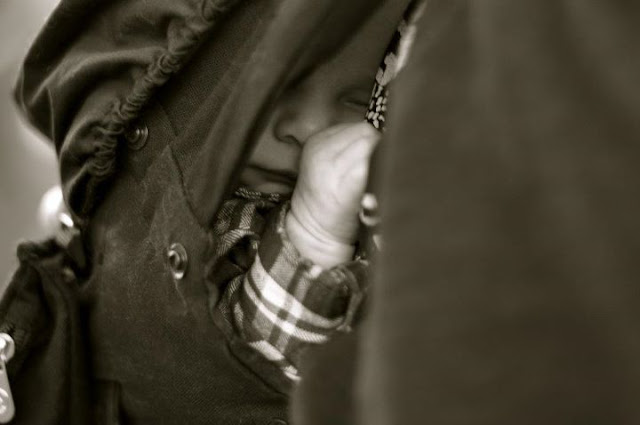 Truth be told there was a lot of beauty in those walks. There is something indescribably wonderful about feeling your warm sleepy baby cuddle next to your chest with his hands nearly wrapped around you in a hug. To smell his hair and feel his breathing pattern shift to match your own. It is all of the magic of pregnancy without the nausea, vomiting, splitting ribs and sciatic pain. But there was fear too. Our son was born in August and our Canadian winter was fast approaching.
When we weren’t walking we were bouncing. Our son scoffed at fancy baby accessories like swings and bouncy chairs preferring instead the warm arms of his auntie Tata who spent hours every evening bouncing him into a state of complacency. She bounced him until her arms hurt and then denied that they hurt and bounced him some more.
We swaddled him, we shushed him, and we swayed with him in our arms. We recreated the womb to the best of our abilities. We were smack dab in the middle of the fourth trimester.  But the thing about trimesters is that, just when you think you will be in the middle of one for the rest of your life, they end. In the middle of my first trimester, when the term “morning sickness” seemed like a horribly deceptive name for the morning, noon, evening, and overnight sickness that I was dealing with was at its worst I thought it would be like that forever. And then week 12 hit and soon I was only throwing up once a day. And at the end of my third trimester when my precious, tiny, baby felt like an elephant pushing on my sciatic nerve I was sure I’d be the first woman in history to be pregnant forever. And then I wasn’t.

The same thing happened to our fourth trimester. One day I put him down in his playpen so I could brush my teeth before heading out for a walk. I expected him to cry. He always cried when we put him down. Except he didn’t. And the next day I decided to give that fancy swing another try. And he fell asleep in it. Suddenly there were periods of wakefulness where he didn’t seem on the verge of screaming at any second. My wife and I exchanged hopeful glances. We were too afraid to give voice to what was happening as we feared that it could just be a fluke and the crying could start again at any moment. But it didn’t. And his Auntie Tata got to actually sit down in our home and occasionally drink a cup of coffee during a visit.
The fourth trimester was ending. But the other thing about trimesters is that after they end there is a reward. When the first trimester ends you get a burst of energy. When the second trimester ends you get to consistently feel the life inside of you move and kick and punch. When the third trimester ends you get the spectacular reward of holding your baby in your arms. And when the fourth trimester ends you get this... 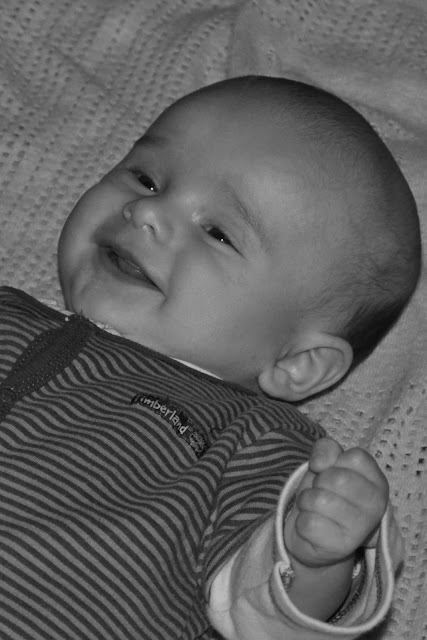 Smiles. All.the.time. And what an amazing reward that is.

Email ThisBlogThis!Share to TwitterShare to FacebookShare to Pinterest
Labels: aunts and uncles not by blood but by love, babywearing, it takes a village, pregnancy