Well it is finally here: the third installment of Mac the Prequel. I’m sorry that it took so long but I have been busy working out the details for a special announcement. This post is being brought to you in conjunction with Co-parentmatch.com.  At the risk of giving away spoilers for the upcoming post, you should know that Co-parentmatch.com is where we met our Andy. So, they have our heart and we’d happily recommend them even if they weren’t giving us stuff (which, of course, they are because they are awesome on top of awesome but I’m getting ahead of myself). According to their website they are the "largest and most comprehensive online site for people who are either looking for a co-parenting partner or sperm donor match... Co-ParentMatch.com was originally set up by a UK based lesbian couple searching for a co-parent. With little option out there but sperm banks and unregulated forum sites Co-ParentMatch.com was born. The site now offers a regulated environment for singles and couples of any sexuality, nationality, colour or creed to meet their potential parenting partner."

If you’d like to read more about their terms and conditions you can do so here. However, what you won’t read about on their website is that beyond hosting it to make a profit the team at Co-parentmatch.com really REALLY wants to see you succeed in your parenting goals. When I sent them an email to let them know about Mac’s arrival the response I received was as warm and congratulatory as if it was coming from my own family.

And with that, are you wondering what my announcement is? Well wait no longer – Co-parentmatch.com is giving away ten (yes ten!) free memberships to Mondays with Mac readers!! I realize that many of you reading this blog are not in need of a co-parent or sperm donor match but my guess is that you know someone who is. Your lesbian niece, gay best friend, single sister – they might all be interested in this amazing opportunity. So pass them the information or enter on their behalf. What you do with the prize is up to you. All it takes is a moment to enter, ten minutes to fill in a profile on the site, and before you know it you could be holding one of these in your arms: 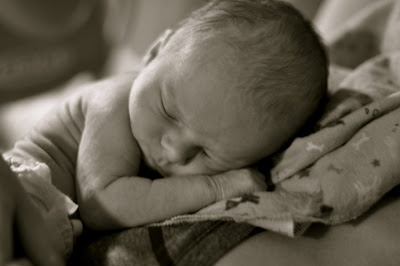