Please join me in welcoming Andy to his first (and hopefully not last) guest post on Mondays with Mac. If you are a follower you will know that Andy is Maclean's father. If you are a new reader you can catch up with our story here. If you enjoy part 1 of his story please leave him a comment below. I have enabled anonymous comments so you don't need to have any kind of specific ID. -- Kristin

I guess I could start by saying that becoming a father was not a snap decision for me. I knew in my 20s I wanted to have kids, and I made the same deal with several of my more flirty and delightful girl friends. "If we reach 35 and you're not married, let's have a baby." In my 20s, 35 was still a vague and distant concept. No one on "Melrose Place" ever reached 35 unless they were rich and ruthless and could afford a nanny in a fabulous apartment. This plan seemed doable.
Well, time passed. The girls got married, or married and divorced and married again, or came out proudly as Cat Ladies. I discovered international travel and international boys and what true love feels like, the highs and lows of a career in advertising, the joys of writing. I was running around with rock stars and artists and getting up to all of the craziness that I'd moved to New York for in the first place. 35 rushed by without comment.


Then one day, the buzzer went off (women have biological clocks, men have buzzers). I had stuck the landing on youth - it was time to officially become an adult. I thought about a friend's father in Turkey, who had congratulated me on still being a bachelor at 39 the summer before. "You're doing it right," he told me on the patio, his grandsons playing nearby under the olive trees. "Just have kids by the time you're 45."


As the big 4-0 approached, I embraced a new battle cry: "If not now, when?" Finish that novel I'd been writing since 2005? INNW! A Jonathan Adler rug for the living room? INNW! I used my new credo to justify everything from Lasik surgery to exploring the lost city of Petra. (pay off those credit cards? INNW!)


But the biggest INNW! - the one that I knew would be most rewarding and take the most effort - was becoming a dad. As my tan faded from a birthday in Ecuador (INNW!), I did a little googling and discovered that New York's LGBT Center was hosting their first ever Sperm and Egg Mixer for would-be moms and wanna-be dads. Co-parenting, it was called, and it came in many shapes, forms and sizes. I was nervous, but the drawing of the sperm holding hands with a fried egg on the invitation clinched it for me - I had to go. 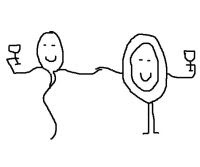 The place was packed. In spite of the folding chairs and bulletin boards crammed with the usual flyers for support groups and HIV testing, the room felt warm and inviting, decked out with flowers and wine and a designated "mingling area." The men looked awkward, like 8th graders at their first dance, hovering by the cheese plates. The women, mostly in pairs, looked like they were shopping for a new sofa. Sizing up each prospect, scanning for flaws, all but testing for cushiness. The first lesson of reproduction was on full display: women do the picking.
I reminded myself that this was just a first pass anyway, to take the pressure off. I was gathering information. I'm good at being aloof. Besides, it was nice to connect with the community over something other than a 2-for-1 vodka special at Good Times. What were the chances I'd meet my match on the first try?
The mixer kicked off with three families sharing their experiences of how they came to be. First up, a single lesbian and single gay man who lived in my neighborhood and shared daily parenting duties. They looked like they also co-wrote Grammy-award-winning songs and knew all about macrobiotic wines and had season tickets to Fashion Week. The baby was a perfect Benetton blend of races, with downtown styling and accessories. Already, the bar was set high. I was surprised half the audience didn't throw up their hands and walk out right then and there.
Actually, it was good to be confronted with this idealized picture of perfection firsthand. In spite of appearances, they didn't seem overly thrilled with each other. It seemed like an awkward arrangement at best. I got a flash of what it might be like to try to raise a baby hands-on with someone who wasn't also my romantic partner. It looked like the friendship would suffer.
I thought about the girls I had made those daydream promises with back in our twenties. One of them was actually still in the running, a "Sex & The City" kind of single successful career girl who looked like Barbi Benton and still wanted it all, or at least the option to have it all.  Barbi lived down the block from me, and when she was between boyfriends, the idea bounces back into contention. I was treated to late-night messages like this...
BARBI: OK - been giving this whole baby thing some thought. We'll have to set rules on this...
1. We do this the old-fashioned way.  6 shots of tequila and (gay) porn.  Nothing romantic as I'll die laughing.
2. Nothing gets pushed out my va jay-jay.
3. And I demand $$ for a trainer - since no way I'm doing the baby fat weight gain thing....I need to look hot & fit
Clearly, our problems would begin long before conception. Barbi didn’t want to hear the words "turkey baster" ("I have needs!") and over time, we pondered every possibility from going "the Mormon route" (sheets...no exposure) to bringing in a "Sperm Whisperer" ("but he needs to be a switch hitter - I got to have SOME fun, too!").
Sperm whisperers aside, we knew we were glossing over one very big, important detail. Finally I asked, "which one of us is going to put their wine glass down and actually raise this child?"
That was Barbi. A lesbian might be different. At the very least, I was confident the turkey baster method wouldn't be an issue. Still, it was clear that if you truly want to share parenting with another person, it helps to be close, if not in love. I didn't have any single lesbian friends who wanted kids. In fact, ever since the Meow Mix had closed, I wouldn't even know where to look for one. There was Brooklyn, but lesbians there already come standard-issue with a partner and a stroller.
Ever-slow on the uptake, it didn't hit me what was missing in that picture - the glaringly obvious opportunity - until the next family spoke. An awesome lesbian power couple (cop and lawyer, just like "Law & Order") who had two kids with a very nice, unassuming, gay man with glasses in his 40s. Law & Order did all of the raising, just the two of them together - the gay man with glasses was a known donor who had given up legal rights to the kids but was still a participant in their lives. More like a Special Guest Star. As Law & Order drove home the importance of carrying all your documents with you on a zip drive while traveling, my heart raced at this new and excitingly perfect possibility. Co-parent with a couple. I could be Special Guest Star.
I could just jump ahead here and say that through the Center, I found out about co-parentmatch.com, and after making a profile and then forgetting about it while I focused on finishing up my novel, I heard from Kris and Tracy and now we have Mac. Or maybe, Kris will invite me back to share about what I learned from a near-miss or two along the way, in the year before I met the Irelands.

Would you like to hear the rest of his story? Let him know below.

Also, please consider clicking on the image below and voting for me on Top Mommy Blogs. You don't have to do anything once you get there. Just click on the image and you are done! You can vote (and by vote I just mean click) once per day.