This is chapter four in a series written by Andy (Mac's dad). To catch-up on the previous chapters please click here.

One thing I love about living in a city of 9 million plus people is the feeling of conspicuous anonymity, of hiding in plain sight. No one has any idea what you’re up to. The man sitting across from you on the subway might be coming back from a show at Lincoln Center, or on his way to a Cyclones game. The lady next to him might be heading home from yoga class, or heading out to see her drug dealer! And that guy over there, the one with the silly grin on his face – maybe he’s a graffiti artist who’s inhaled too many fumes, or maybe, just maybe, he’s a wanna-be dad who’s just gotten the call to bring his balls over to Bay Ridge. Pronto.
Katy had texted me that her ovulation math was all adding up. Since I was leaving the next day for my brother’s wedding, tonight was the night. I had run out of the apartment with my lab results and the co-parenting agreement that we had printed out and talked about but never signed. The co-parenting agreement is nothing legal, just a list of our intentions – things like no money will exchange hands, that I won’t seek custody, and that we all intend for me to be a part of the child's life. It gets more in-depth than that, but the idea is to remind us down the road what we were thinking at the start.
As the train emerged in Brooklyn, I wondered how this would work – the actual sperm donor-ing part. For starters, their apartment was cramped if not cozy, with a frosted-glass bathroom door that didn't really close all the way. Should I have done my duty before I left home and, I don’t know, brought it over in a Ziploc? I could feel the grin plastered across my face – how embarrassing, already. Hopefully Katy and Emilce would have some sort of plan. In the distance, the late-evening dusk glowed behind the Manhattan skyline. I felt like I was floating.
I arrived at their building sheened in sweat, dabbing at my forehead on the elevator ride up. Katy answered the door. Instead of the usual ponytail, she had worn her hair down in loose curls for the occasion. I greeted her, shyly, all smiles, and strode in to the living room where Emilce sat waiting, her hands shoved deep into the pockets of a Members Only jacket.
"I brought this,” I said, plopping the co-parenting agreement down on the coffee table. Emilce picked it up, flipping the pages back and forth. She studied it, as if for the first time, and a strange silence filled the room – just me catching my breath and Emilce flipping those pages back and forth.
"We'll have to read this over and get back to you," she said finally, without looking at me. Her voice trembled with a restrained anger, like I was trying to pull something. It was as if instead of a co-parenting agreement, I had handed her my plan to skip town with Katy on the next freight train passing through.
I was stunned. Completely caught off guard. This agreement had been part of the plan for months. And Katy had just texted me to come over not even an hour ago. Where was this coming from?
I looked at Katy, lingering on the sidelines in the kitchen doorframe. She wouldn't look at me either.
How would my nieces have put it? That awkward moment when your wife cockblocks the sperm donor.
Riding back into Manhattan, all I could think was, what is going on in that relationship? How could one partner be taking her basal body temperature and cheering her eggs on while the other sat back and quietly plotted to pull the plug on the whole operation? I laughed to myself, the hollow laugh of the burned and baffled, realizing that whatever had gone down in the 40 minutes between Katy texting me to come over and Emilce sending me packing, it must have happened while Katy was curling her hair.
The next morning I woke up early to pack and leave for my brother’s wedding. But first, I wrote a quick email to Katy and Emilce. I kept it chipper, saying that I certainly wasn’t trying to rush anybody, and I hoped we were still on, that the co-parenting agreement was the same thing we’d been talking about since the beginning, and to please let me know.
I held onto my cellphone all the way to the airport, waiting for a beep or a buzz in reply. Nothing. When we landed in Ogunquit, still no word.
It wasn’t until I arrived at the hotel and saw my mom and dad, sitting with my brothers and nieces and brother-in-law, our high school friends and their wives, all having lunch and thrilled to be together on the beautiful coast of Maine, that I finally said, screw it. I switched off the phone and left it in my room. Nothing puts things in perspective like being with your family.
Between the whale-watching and the lobster rolls, the poolside lounging and some fine moves on the dance floor, I realized what a mistake I had made by not yet letting my family in on my plans. I guess I was afraid of their reaction – I have a history of surprise announcements. But this wasn’t some scheme to bike across America or teach English in Japan without knowing Japanese. This was about adding to our family. They deserved to know, no matter how nervous I might be about the response. And the truth is, my family has always been very supportive, no matter what. Were we not, this very weekend, wearing ties with little lobsters on them for Steve and Kathleen? 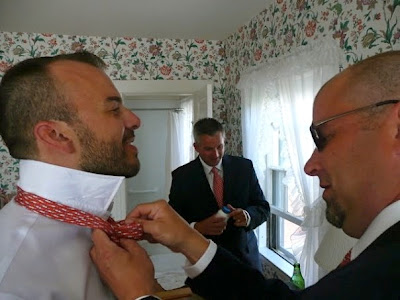 On a drive to the airport, I had a chance to talk with my sister. I told her about my big fatherhood plans, and how I’d met a nice couple six months ago and it had almost happened – almost. And how I had wanted it to be a surprise. She melted with that kind of warm understanding that sisters radiate, that tenderness and an encouraging smile that is the best a guy could ask for in a situation like this.
"Well first of all, it's wonderful that you want to be a dad. But if they were having a change of heart, it's much better you found out now than after a baby's on the way."
Yeah, I told her, I guess it’s for the best. Maybe I was trying to see us as more compatible than we really were. They did tend to think all men were shady. And Emilce had this weird eye thing where one of her eyes kind of looked off over your shoulder while she was talking to you. And once they had invited me over for brunch and served this bacon substitute stuff that looked like something from a Soviet prison – could I really stand by while they fed that to a child?
I was joking, of course. Well, mostly. But if you can’t rip on the people you are no longer going to be having a baby with, who can you rip?
The next day, the message finally came. Emilce didn’t trust that I would be content with just a ‘fun uncle’ role, and they had decided to go ahead with a sperm bank after all. “I have to protect my family,” she wrote.
Fine, I thought. Go and have your Gattaca baby. Just send me my stuff back. They still had my pounamu necklace, the one they’d never gotten around to finding a string for, and my new stud detector. Send it all back so I can get on with my life and forget I ever met you! (I’ve learned from an ex or two that sometimes it takes a little drama to get results).
It took a few weeks, but Emilce did mail everything back, along with a new string for the necklace. I thought about leaving her hanging, but the truth was, she had done us all a huge favor. I didn’t have faith in them as co-parents. I didn’t respect their decisions, I didn’t even respect their Facon. While Katy and I glossed over potential problems, Emilce trusted her instincts: I wasn’t going to be content in a ‘fun uncle’ role  – not with them. And they didn’t really want a known donor, as good as it had sounded on paper. She alone was brave enough to stand up and call it off, even as her partner lit candles and curled her hair.
I wrote Emilce an email to say I’d gotten the package and thanks for the string and good luck with everything. She wrote right back: “good luck with everything too :)” And somehow that made all the difference.
*[Ten months later – just after meeting a wonderful couple from a strange place called ‘Ottawa’ whom I had a great feeling about and fingers crossed that it would all work out – curiosity got the best of me, and I peeked at Katy’s Facebook page (long-since de-friended). I’m happy to report that the very fertile Katy must have conceived the next month, because beaming from her profile picture was a beautiful newborn girl who looked just like her.]
Next Up,
Mr. Mom?

Please take a second and click on the image below to vote for me on Top Mommy Blogs. You don't need to do anything else - just one click!