I didn’t sleep while I was pregnant. At all.  You might think I’m being overly dramatic when I say that but I assure you I am not. I turned my bed into a big bouncy castle of pillows. That’s one thing they don’t tell you about pregnancy. You will never have enough pillows. And then I bought one of those giant C shaped pillows because other pregnant women on the internet promised me that it would fix my backache, support my ever-growing stomach, and stop the numbness in my legs. I was under the impression that it would probably also cure cancer. So I spent $70. On a pillow. 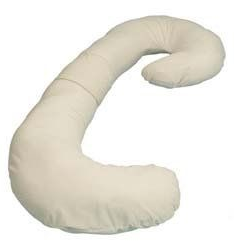 Instead all it really did was create a fortress of no-sex-for-you that separated me from my wife. Which, was totally fine because if you haven’t slept in several months the last thing you want to do in bed is have sex with anyone. And when you are married to someone who is both hormonal and hasn’t slept for several months you probably don’t want to have sex with them either. So really the pillow served no purpose whatsoever. And did I mention it was $70? For a pillow.

I started to resent Tracy for sleeping. I took her ability to fall asleep minutes after her head hit the pillow as a personal attack against me and our unborn child. She was like a Real Housewife of Somewhere Fancy eating a lobster dinner in a soup kitchen full of hungry homeless people. Total bitch. Eventually she got sick of my “accidental” jabs into her ribs and constant tossing, turning, and huffing. She moved into the spare room. She blamed it on the pillows that seemed to be multiplying and said that she was just giving me more space. I told her that if she was moving rooms she better go buy her own pillow because she wasn’t taking any of my eight. 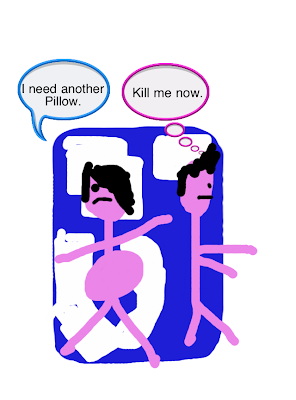 Some pregnant women anxiously wait for the day that they can crack open a beer or scarf down some sushi. I was too busy (day) dreaming about sleeping pills. So when Mac was born and I could suddenly sleep again I was on top of the world. He would sleep for 2-3 hours at a time and I was usually able to sleep for at least 2 of those shifts. Three hours of sleep felt like an eternity. I would lay down in bed with him and nurse him until he was fast asleep. Then I would deposit him into the playpen at the foot of the bed and snuggle under covers. Breastfeeding was like a magic sleeping pill.

When you have a new baby people will often ask if you are getting any sleep. Is he letting you sleep? How is he sleeping? Sleep. Sleep. Sleep. But my answer was always the same. I’m getting the best sleep of my life. And it was true. It was glorious.

Then somewhere around the two-month mark he started sleeping through the night. And I don’t mean the 5 straight hours that professionals call STTN for a baby. Every single night at 7:30 PM he would fall asleep, no matter where he was and what he was doing, and he would stay asleep until 5:30 AM. The first time it happened I woke up certain that I would find him dead. But he wasn’t. He was just sleeping. Through the night. I took great pride in this. Clearly, it was an indication of my stellar parenting. I bragged about it every chance I had. Hate me a little bit? That’s OK, I hate that me a little bit too.

I moved him from the playpen in our room into the crib in his own room. We wouldn’t be one of those co-sleeping couples. We would establish clear boundaries and teach him to sleep on his own. We would protect our bed and our (newly returned) sex life. I was winning at parenting.

I had heard about the “4 month sleep regression” but I didn’t believe it. In case you hadn’t heard, my son was sleeping through the night. But it's totally a real thing. And it happened.  Some nights he would wake-up every hour. He started acting as if his crib was a bed of nails. He could be out cold but if I dared to place him gently into his crib his eyes would pop open and he would scream as loud as his little lungs could.

And so we transitioned him into our bed. Truthfully, we didn’t really mind. Everyone was sleeping and there are far worse things than sleeping with a warm, snuggly, baby. Like basically everything else in the world.

And that's how we have been going for the last 6 months. But suddenly this week things have changed again. I almost don’t want to jinx it – he has been sleeping between 9 and 11 hours a night. Uninterrupted. Seriously. This time I’m not delusional enough to believe that I have anything to do with this change. He is running the show. And while I enjoy his warm baby breath on the back of my neck at night I do hope that he will one day sleep in his own bed. Hopefully before high school.