When you have two moms it's hard to pick a favourite. Unless you are a baby. Then it is easy. Apparently.

I've always been the favourite mom. I don't usually admit that out loud (or in digital print as the case may be). When there is a mother and a father in the relationship it's common for a baby to prefer his mother. Of course, there are exceptions but nobody bats an eye when the baby wants his Mama. When there are two moms, the situation becomes more complicated. I grew him in my belly. For nine months his life was indistinguishable from mine. And in the last ten months he has only begun to take the first careful steps (on all fours) away from me, dividing our bodies into two separate beings. And when the space between him and me grows too large he writhes and cries until he is back in my arms.

His other mom (as well as his Auntie Tata and Gramma) have been able to calm him.  But in his worst moments of fear and uncertainty it has always been his Mama that he needs. I have pretended that I feel bad about this habit. I have brushed off his favouritism by assuring those he is rejecting that it is simply because I have the boobs. He loves the boobs more. Not me. But secretly my heart swells with pride. I'm the favourite. It's shallow and petty I know. But it is what it is.

And then this week my Dad turned sixty and my brother's fiancé had her bachelorette in the same weekend. We packed up the baby and drove the six hours (post baby it is more like nine hours) to celebrate with my family. My wife surprised me by taking an extra two days off of work to extend our visit. For five days we were inseparable. Three heartbeats. One being. Each morning Mac woke up between two moms. At home he often wakes up next to only one mom because Tracy is already awake and getting ready for work. But on vacation he woke up slowly. Flipping back and forth between us. Mama and Mommy. He would open his eyes, smile, and touch my face. Then he would flip over and do the same to her. Then back to me. Over and over. Happy. 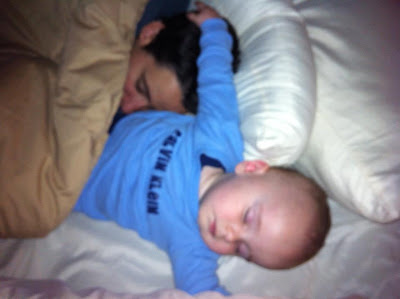 And although he was passed around to various grandparents, aunts, uncles, and cousins, both moms were always close by. At no point did his Mommy put on a collared shirt and slip a lanyard with keys around her neck. She didn't wave goodbye and leave the house. And he got used it. To her constant presence. The look of her in a t-shirt and shorts. The smell of her never far away. 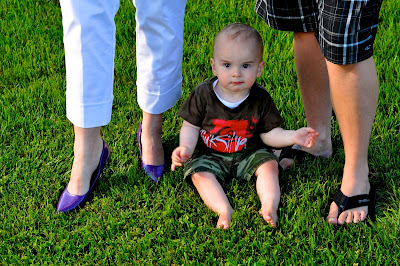 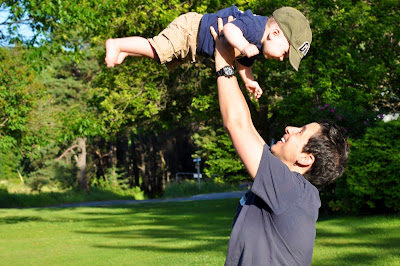 But, as they always do, vacations come to an end. Yesterday we returned home and this morning Mac woke up next to only one mom. With his eyes closed he stretched his hand to the other side of the bed. Frantically feeling for her but finding only an empty cold space. He turned back to me and opened his eyes. Relieved that there was at least one mom in the bed but disappointed nonetheless. Before I could stop him he was on the floor and crawling, as fast as his little legs could move, looking for her.

Finding her in the bathroom he sat at her pant leg, pulling and shaking, desperately trying to get her attention. She paused for a moment from her time sensitive hair procedure to grab a quick cuddle.

I pried him from her arms and brought him into the living room in an attempt to distract him. I showed him his favourite toys and even broke out my secret weapon (a pocket full of Goldfish Crackers). My plan worked with limited success until she entered the room again. That's when Mac saw the full picture. The collared shirt. The lanyard. The keys. And he broke down. 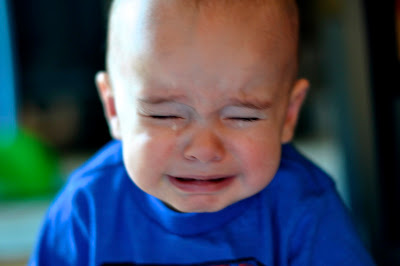 I scooped him up and brought him closer to her. But as soon as he was within grabbing distance he was  pushing with all of his strength away from me and towards her. His arms reached out and he grabbed at her shirt trying desperately to get into her arms. Unable to resist his desperation she held him close. Tears staining the collar of her shirt. He clung to her like she alone could save him from whatever peril he was about to meet.

And as the clock moved forward, reminding her that she would soon be late, she reluctantly passed him back to me. At which point all Hell broke loose. He wiggled out of my arms and crawled after her towards the door. His tiny fists banged on it as it closed behind her. I picked him up and opened it so that we could wave goodbye as she left. Her wave brought a short reprieve to the tears. But as the car door closed and the tires turned to lead her away he again became inconsolable.

I tried to explain to him that she had to go to work so that he could be kept in mashed bananas and goldfish crackers. I told him that she hated leaving him but that she was working, so hard, for us. But such rationals are lost on a 10 month old.

So, instead, I just held him while he cried. I rocked him and stroked his head. My heart hurt a little with the realization that biology and breast milk were no longer making me the favourite mom. It seems that time spent together can trump them both. But I couldn't blame him, really, she's my favourite too. Eventually his sobs turned to sniffles and his head rested on my shoulder.

"I understand baby," I whispered in his ear, "I miss her too."

Many thanks to Thimble Cakes  for sponsoring this post. Whatever the "free" you need, ThimbleCakes can help! They are a completely nut and egg free bakery offering the best cupcakes in Ottawa Ontario from sugar free or gluten free to corn free, rice free, soy free and vegan.

Email ThisBlogThis!Share to TwitterShare to FacebookShare to Pinterest
Labels: aunts and uncles not by blood but by love, gay stuff, grandparents, loving THIS much, pictures that will make you smile, Same Sex Marriage, sponsored post
When you have two moms it's hard to pick a favourite. Unless you are a baby. Then it is easy. Apparently.
2012-06-27T11:08:00-04:00
Mondays with Mac
aunts and uncles not by blood but by love|gay stuff|grandparents|loving THIS much|pictures that will make you smile|Same Sex Marriage|sponsored post|
Newer Post Older Post Home
Subscribe to: Post Comments (Atom)