"Are we going to go to the farm and see the horses?" My wife asks our son as we buckle him into his car seat. A grin that falls somewhere between Opie and Denis the Menace spreads across his face and he holds his hand out flat while repeating "nummie, BoBo, nummie, BoBo." BoBo is what he calls my mother. And she once took him to a farm and taught him to feed the horses with a flat hand. So now he assumes she will be present wherever there is a horse. "No BoBo," we tell  him. He seems confused.

I'm pretty excited to get to Tracy's Aunt and Uncle's farm. If you know me this might confuse you. I'm hardly the farm kinda gal. But I know my kid is going to love this adventure. He naps on the drive and before we know it we are driving down the dirt road. We pass a girl riding a horse. That's Tracy's cousin. Then a man on a 4 wheeler. That's Tracy's uncle.

After a rainy morning the air is moist and thick with mosquitos. But instead of dreading opening the doors of our air conditioned car I find myself pointing to things out the window and getting Mac to bounce with excitement in the backseat.

We have barely hugged our hellos when Tracy's uncle Larry tells us that one of the cats in the barn will likely deliver her kittens any day now. Mac doesn't say the word cat but he recognizes it. "Meow, meow, meow," he chants and we are heading into the barn to invade the poor girl's privacy.

Is that blood on her tail? OMG she's having a kitten right now! 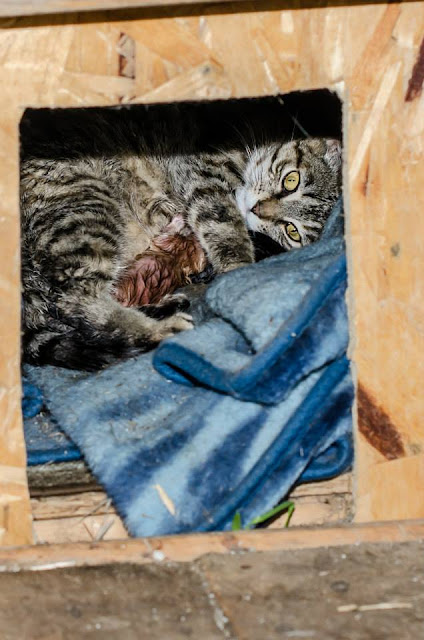 Mac is fascinated by the "baby meow," and it's difficult to tear him away from the scene. There's a solidarity I feel with this birthing mom. I didn't want a lot of people around either.

We eventually convince him to come and feed the horses and after careful consideration he agrees. Hands behind his back, he marches toward the horses like a farmer surveying his grounds. 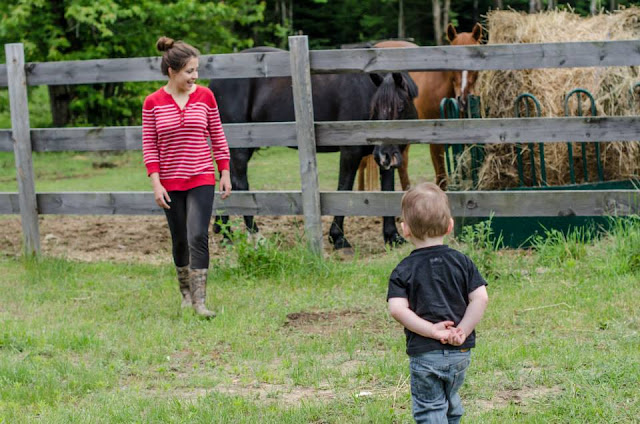 At first their size intimidates him but soon he's bossing us all around and making us pick handful after handful of grass to feed to the "big dogs."

As the sun moves down on the horizon the mosquitos come out to play with a vengeance and we decide to head indoors for dinner. Mac throws himself on the ground at the prospect of exchanging grass for wood floors. A full-on fit like only a toddler can throw. When it comes to mosquitos he's like a honey badger. And honey badger don't care.

Unless, of course, there's cake. He'll come in for cake. And there is.

But indoors at the farm proves to be nearly as fascinating as outdoors. There's another cat. The indoor cat that wears a collar. And a piano. And a whole room full of adults who are willing to clap while loud banjo music plays and he dances in the middle of the room, delighting his audience with his moves. 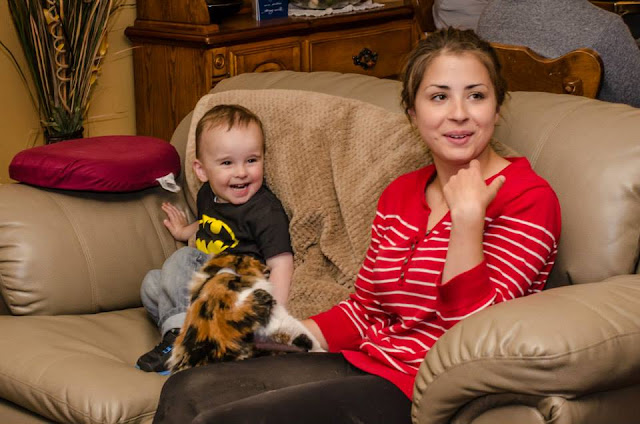 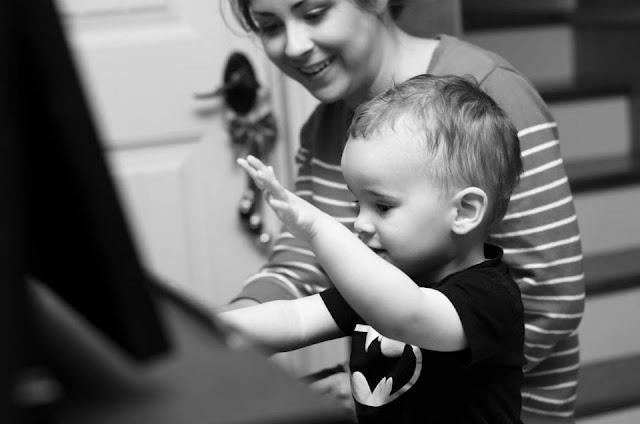 Everyone has to work in the morning and as the minutes tick by we know we need to start heading home. But there is one more farm adventure for Mac to experience. The tractor. He knows what tractors are. We see them in his books. But he has never seen one up close. His whole body barely the size of a wheel.

As we approach he stops and bends down. One hand rests on his knee and the other points to the big yellow digger tucked behind the trees. His little body vibrates with excitement as he moves quickly towards the big machine. He's thrilled just to be in its presence. To feel the cold rough metal under his fingers. Larry helps him to climb inside and his eyes grow large as he gets to pretend he's driving. 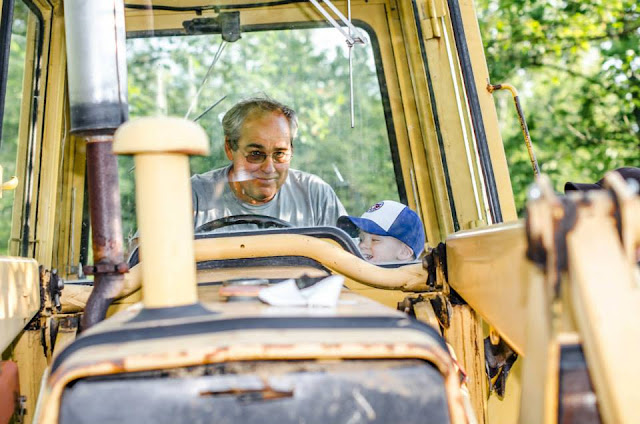 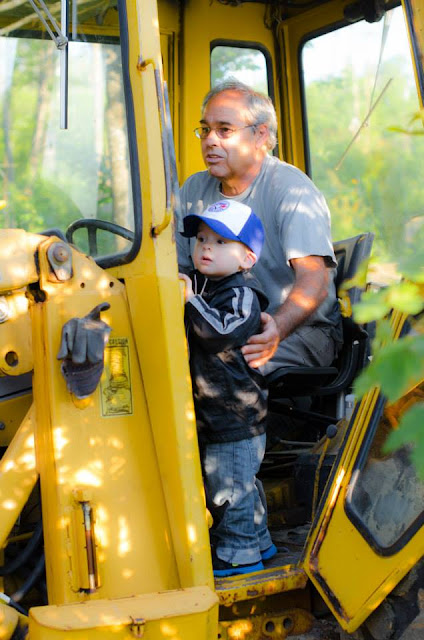 Larry and Tracy switch places and conspire to blow his tiny mind. After a few quick instructions from her uncle Tracy smiles at Mac and turns the big machine on and drives forward. The distance they travel is short, maybe 100 meters, but Mac is amazed. The bucket comes up and down and it's clear that this is more exciting than Disney World. 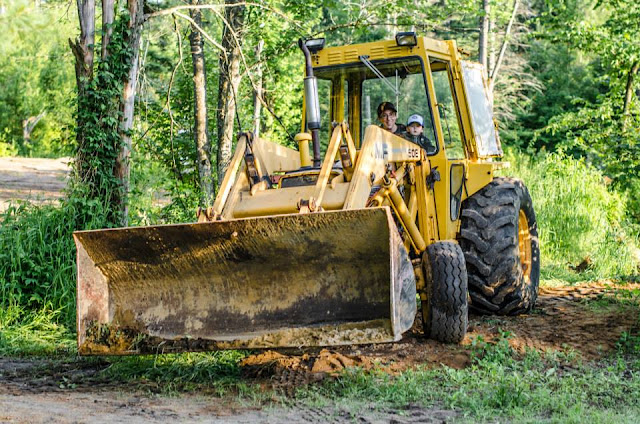 The day comes to an end and we put our dirty and exhausted toddler into the backseat and buckle him in. We've picked up a carful of mosquito hitch hikers. I hope we can get rid of them on the drive rather than bring a new colony of Quebec deep woods mosquitos back to the city.

As we drive down the dirt road I turn to my wife and sigh. "It's too bad we don't have any free holiday time this summer. It would be fun to come back here for a few days." Her forehead crinkles as she looks my way. No doubt thinking about my usual preference to stay in fancy hotels in the middle of the city for vacation.

"You've changed." She says. I look into the backseat at Mac who has resigned himself to the fact that we have left the magical place behind and is now focussing on trying to keep his heavy eyes open.

Visit BeautyStoreDepot.com and get free shipping and 10% off all orders with the code 10AA.