Same sex marriage has been federally legal here in Canada for nearly a decade. When I chose to marry my wife we were able to do so with all the legal rights and responsibilities of our heterosexual counterparts. But we knew that was not a universal right. When our son's dad married his husband this past year he did so in a state that recognized his union in a country that did not. But last week that changed. DOMA was struck down by the supreme court and it made a substantial, pragmatic, difference in Andy and Raf's life. The fight isn't over by any means. Most states still don't allow same sex marriage. But it was a victory. And we need to take moments out to celebrate them when they come. So please join me in welcoming our favourite "special guest star" to Mondays with Mac this week! Congratulations boys! We love you so so much!

Oh, but before I turn the blog over to Andy I just thought I'd mention, you know, in case you were wondering, that today is my birthday. And you have the opportunity to buy me the absolute best present in the world! If you follow me on social media or regularly read this blog you will know that Paige Johnson's story has grabbed ahold of my heart and held on tight. As a mother, as a lesbian, and as a human being it has rarely been out of my mind for more than a few minutes. Paige has 58 days of incarceration left. We are doing pretty well at collecting enough money for her to make a phone call home to her mother every day from now until then. Each phone call costs $6. So, if you can swing it, sending her mother Jackie a $6 donation would make THE BEST BIRTHDAY PRESENT TO ME EVER. The donation can be sent via paypal or snail mail (message me for addresses at kristin@mondayswithmac.com). Generous people have been making donations already and we now only have 42 days left to collect money for [UPDATE: Since posting 4 more people have donated. We are now down to 38!]. Can we get to zero before my birthday ends?

If a cash donation isn't possible you can also send Paige a letter. These connections to the outside have meant so much to her these last few weeks!


How does the striking down of DOMA (Defense of Marriage Act from the 90s) affect me?

The short answer: Goosebumps. What a wonderful feeling when the world goes your way!

I ran into my boss in the elevator that morning, a long-time New Yorker who came of age in the gay era just ahead of mine. (In Diva Terms, his diva is Donna Summer, while mine is Madonna. Rafael's are the ones still on the radio: Rihanna and Britney).

"Tell me something good," he said, obviously meaning something about the account I work on.

"I'm so happy," I replied, work being the furthest thing from my mind. It took a moment, but then, oh yeah, he realized what I meant.

"I saw it break on the news and I got kind of choked up," he said, a little surprised at the emotion of his own reaction.

And I totally knew what he meant.

At face value, the decisions make an immediate and concrete difference for couples like Raff and me. New York is now a viable option – I can sponsor Rafael for a visa, and he can pursue his career and studies in New York, if he wants to. (I love my husband for innumerable reasons, one of them being that he feels no need to jump when the US Supreme Court says jump.)

But in that quick chat with my boss, I realized that something else was going on here, something bigger and more mysterious than Neil Patrick Harris' wedding plans. This was not just a win for couples juggling the logistics of "settling down." This is a big, emotional win for us all.

Thinking back to those Madonna years – I'm talking Paleolithic Madonna, like "Like a Prayer" and "Vogue" – there wasn't a whole lot about being gay to feel "so happy" about.

There were big depressing things, like the AIDS epidemic. There were little annoying things, like the police showing up to tow cars from the Pride Celebration. And there was this forlorn, prevailing sentiment – one shared by British indie bands and Midwestern moms alike – that being gay meant, at best, a life destined for loneliness and alcoholism.

Things changed, of course. Little by little. And yesterday, in a wave of goose bumps, they changed a lot.

So to hear my young friends at dinner ­last night – ready to propose now that marriage is "a real thing," looking forward to being on the Old Navy float at the Pride March this Sunday, tweeting about their celebrity boyfriends' latest successes – to feel the world going our way – it just makes me so happy. 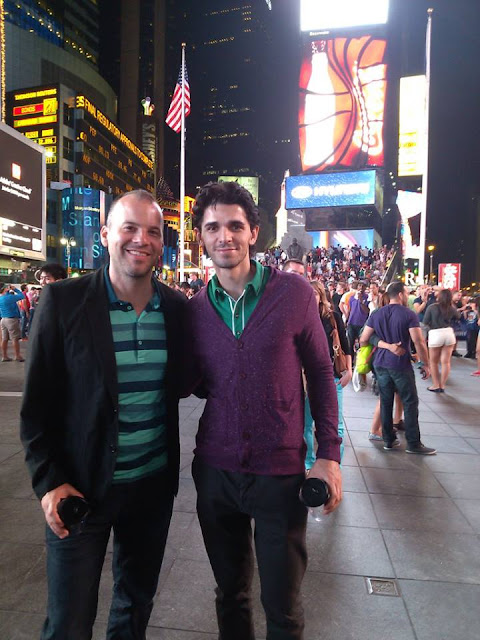