I took Mac outside for a photo shoot yesterday. He’s at that perfect age where he can sit and smile on demand but can’t yet crawl away. I know it’s only a matter of time before his curiosity will lead him on adventures far and wide and I’ve resolved to take more pictures of him while he’s still stationary. If you know me, and you are drinking some form of liquid at the moment, it may be coming through your nose as you laugh at the preposterous notion of me taking MORE pictures. But could I really ever get enough documentation of this smile? 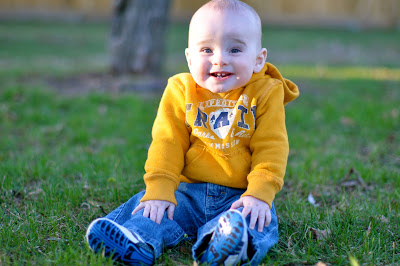 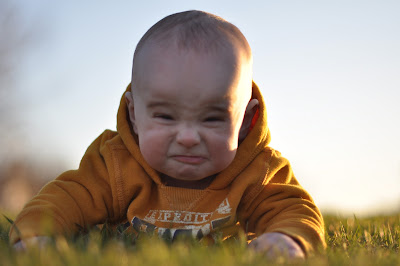 Of this look of pure innocence? 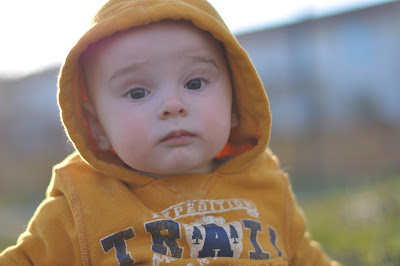 So, there I am, snapping away happily. Lying down on my belly on the cool spring ground as twigs poke at my hips, I must look like such a weirdo. Fergus is tied to the stroller, which is now laying on its side as he attempts to get into the picture too. But not too close to that baby these days. He pulls hair and tails now.
Some people are giving me puzzled looks as I make ridiculous sounds and embarrassing faces in an attempt to turn Mac’s interested and steady gaze into a laugh. 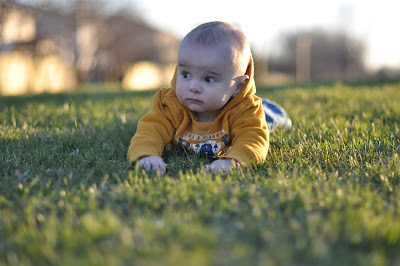 A few older women walk by and stop to admire us for a moment. They likely had babies of their own (probably before the shutter-happy freedom of digital photography). They get it.
And then Mac realizes that he can pick up the stuff that surrounds him. Grass and leaves and dirt. It’s all new! 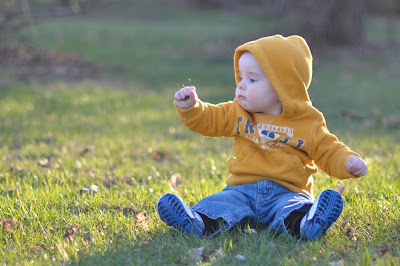 His head turns to the side as he examines the handful of earth in his hand and then I shudder as I realize that (of course) it’s about to go in his mouth. I panic a little bit as I watch this unfold through my lens. He hasn’t even had peanuts or dairy yet! Surely these things should come before dirt. 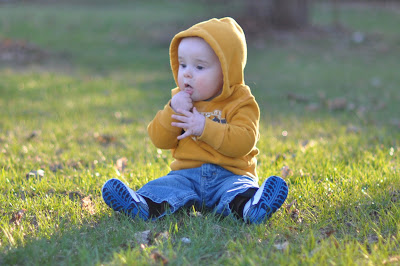 Instinct takes over and I leap up and towards him, brushing the dirt from his hand. And I scare him in the process. So now there are tears mixing with the dirt on his chin and I’m afraid the whole photo shoot might be over. But I pick him up and rub his tiny head while whispering reassuring words in his ear. The tears slow down and I can tell by the look in his eyes that he has forgiven my over reaction.  When his smile returns I put him back on the ground and watch as his hand goes straight for a leaf that is looking primed for a taste test. 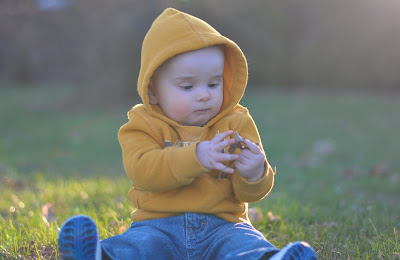 I laugh and roll my eyes. You win Macaroni. And I realize that he’s probably fine. He probably doesn’t have Pica. He probably won’t be that weird kid who sits in the sand box eating dirt (and if he is, he’ll still have two moms who love him fiercely and presumably he will eventually outgrow it). He’s just a kid. Eating dirt. Learning about his world by tasting it.
And I think that maybe I’ve learned a lesson. They say that when you have a child it is like forever having your heart walk around outside of your body. And at the risk of sounding cliché – it is so damn true! But the baby stage is a bit of a trial period before the heart takes off walking away. As an infant Mac is tethered to me. My heart is rarely more than an arm’s reach away. Tucked close to me for safe-keeping. But he’s growing – bigger and better with each passing day. And I will have to let him move farther away from me as he becomes his own person. I will have to give-up some of the control I have over his actions (if you know me, and are still drinking some form liquid, it may have just come out of your nose again—sorry about that). I will have to let him make his own mistakes and earn the occasional skinned knee. Because that’s how he will learn.
So I took that lesson to heart and promised to let him try new things even when they scare me. And I wasn’t the only one to learn a lesson. Mac also learned that he doesn’t like the taste of dirt. 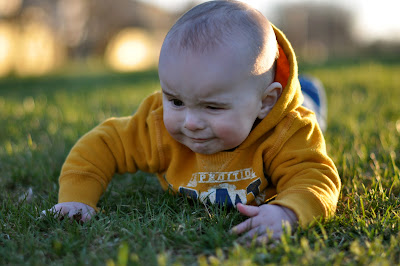 Please take a moment to click on the image below. Doing so will register a vote for me on Top Mommy Blogs.