It has been a while hasn’t it? Let’s see, where were we? Oh yes, Tracy and I decided to try and find a known donor and in the process I lost my damn mind obsessively doing everything I possibly could that might make my eggs more attractive to the millions of sperm I hoped they would soon be meeting. We put an ad up online and found some of the wackiest men who are sitting at their computers hoping to give their sperm away to lesbians (because giving sperm to lesbians apparently sounds super hot until they tell you that the delivery system is a needle-less syringe). Then we found an ad on co-parentmatch.com from a gay New York City man looking to father a child, fell in potential-baby-daddy-love, and embarrassed ourselves by clicking on his profile a bazillion times before paying for a membership and realizing that he got a notification every time we did.  We nervously exchanged emails and facebook messages and let ourselves get super excited at the prospect of making a baby with such a sweet and funny man. And because the universe apparently loves us, he already had plans to be an hour away from our house which meant a “first date” was imminent. In true lesbian fashion, Tracy and I did the baby-making equivalent of u-hauling* and wondered if asking for sperm on the first date would be too forward. And when I last left you we had driven to Montreal to meet Andy, Tracy spilled half of her coffee all over me in the car and even though I lied to her and told her we had to leave earlier than we really did we still managed to be late. But that was OK because Andy was even later and it gave us time to have a rum and coke (or three) and peruse the ridiculous Le Club Sandwich menu which listed a bacon and chicken sandwich as vegetarian.


And then Andy was walking towards us and that’s where we left off. All caught up? OK good.
Before we get into the next chapter of this story can you do me a favor and click on the image below. Doing so will register a vote for me on Top Mommy Blogs.

All done? Awesome. Thanks. Now we can proceed.
Thankfully, I haven’t had a lot of first dates in my life. I make a terrible first impression. I’m OK if that first impression is being made via the internet and I am communicating with a keyboard. But in real life, with all the eye contact, needing to remember normal words, and no backspace, I’m kinda screwed.

I spent the night before the big first meet at our friend Tammy (Mac’s Auntie Tata)’s house trying on a variety of grey (mostly v-neck) t-shirts. That girl has a serious addiction to gray tops. Tracy and Tammy tolerated my obnoxious trying on of very similar shirts and eventually decided that the one with the retro-ish woman’s face on it would be the best choice. Montreal is a trendy city and the consensus was that the face t-shirt was trendy.
Except that I grew up in a town where trucker hats were popular before Ashton Kutcher made them a thing. Cowboy boots were all the rage (even those pretend ones that cut off at the ankle) and restaurants had designated snowmobile parking.** I am not now, nor have I ever been, trendy. I couldn’t decide so I took about seventeen of them home with me.  And then ultimately wore my own gray v-neck t-shirt with purple stripes.
Tracy couldn’t understand why I was so nervous. Andy and I had been emailing back and forth a lot and while she read all of the correspondence she only chimed in for the occasional one sentence response. She’s an old-school two-finger-typer who prefers face-to-face conversations. She seemed to think she should be more nervous than me since she had talked with him less. But she always makes a good first impression. She’s witty and confident. She doesn’t understand what it’s like to be face-to-face with a new person and forget words like “tree.” You know, those tall things, in parks, with the green things on the top.
Anyway, I’m going backwards aren’t I? So Andy was walking towards us. His walk was a combination of a quick, I’m late, stride and a casual saunter. In a red golf shirt and jeans he looked entirely down to earth and friendly. He was taller than I pictured and his smile was bigger than his facebook photos let on.
“There he is,” I said to Tracy who didn’t really believe me because for the last twenty minutes she was pointing to everyone from a sixteen year old skateboarder to 50 year old father of three and asking “is that him?” while I reminded her that she really should wear her glasses more often (and not just because I think girls in glasses are hot).  He recognized us too and gave a little half wave as he approached.
Have you been waiting long?
No [we had]
Have you ordered a drink yet?
No [we were on our third and hoping not to look tipsy at 2 PM]
We stood, did some awkward hugs, and sat down to get to the business of talking about baby-making. Ordering lunch was a bit of a disaster. As you may have guessed, vegetarian fare was not Le Club Sandwich’s specialty.
Bonjour, Hello, Que voulez-vous manger?, What can I get you ?
Um, Hi, can I get the BLT but without the bacon and mayo ?
You don’t want bacon ?
No thank-you.
So a BLT without bacon ? Just lettuce and tomato ?
Just lettuce and tomato.
And no mayo ?
No mayo.
Are you allergic ?
Lets go with that.
I’m guessing they hadn’t seen a vegetarian before. I wasn’t about to explain being a vegan.
Ordering aside, lunch went really well. I stumbled over words and smiled a lot and tried to let Tracy carry our half of the conversation. Andy told us about his family and his reasons for wanting to father a child. He told us about the lesbians who changed their minds and wanted to make sure that we knew what we wanted. He directed most of his questions to Tracy. I later realized that this might have been because it was the non-carrying partner who had changed her mind with his previous moms-to-be but in the moment it gave me a lot of reassurance that he would prioritize her role in all of this.
Wanting a bit more time together we decided to go for coffee. Andy seemed pleased that the Canadian stereotypes he was used to were unfolding before his eyes. He smiled every time Tracy said “eh” and he laughed at the fact that one of the biggest coffee chains in Canada was called Second Cup.  In New York it would be The first cup, the best cup, the only cup, hurry-up! But in Canada it was all Oh, don’t worry, take your time, go somewhere else for your first cup, we’ll still be here waiting when you are ready for your second. He marveled at our coloured money with pictures of kids playing hockey and chivalrously paid for our coffee with his “Helen Mirren dollars.”  I guess my stumbled words and nervous laughter didn’t deter him too much because after coffee we decided to go for a walk on the trails at Mont Royal 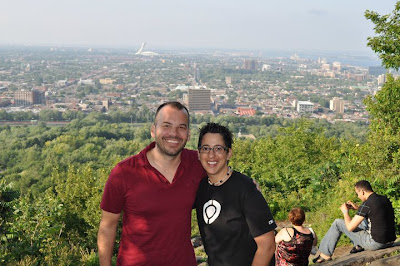 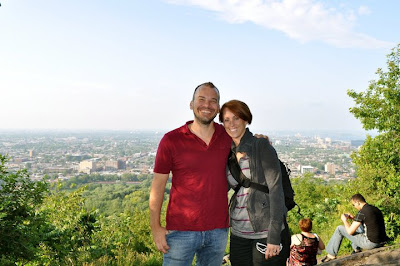 It was while walking on a narrow dirt path that Andy finally asked when we thought we’d be ready to start trying. With visions of u-hauls flashing in our heads we told him that actually I would be ovulating that weekend, which also happened to be my thirtieth birthday.
But more on that next time.
*Urban Dictionary definition of U-hauling: the speedy act of moving in together after a brief courtship between lesbians.
**I would offer an apology to any Lively folks reading this blog but chances are you are nodding your head, non-nonchalantly shrugging your shoulders and thinking “true enough.”
If you ignored my earlier request for you to click on the Top Mommy Blogs image and you are still reading here is one more chance: