Playing it by Ear

First of all, sorry for my indolence. I owe Mondays with Mac about a gazillion posts at this point, including the one I promised I’d write while waiting out Sandy this weekend. With all that free time, you’d think I could have gotten a lot of things done, and I did. Things like buying batteries and wine and moving potted plants inside and watching endless live reports from the beach about how people shouldn’t be at the beach right now. Writing somehow didn’t factor in - I should have known myself well enough to block off my calendar for GENERAL ANTICIPATION.
But even before superstorm weekend, I didn’t have a good excuse, except to say I’ve been busy. When Tracy and Kristin first met me,* I was a single, freelance, jet-set, bon vivant Special Guest Star. *And yes, I know, I haven’t yet gotten to the ‘When Tracy and Kristin first met me’ part of How I Met Your Mothers – but current events have me jumping ahead in the story to this very special update: I’m getting married. 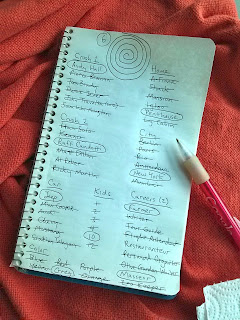 So for the moment, I’ll skip over the part where I get fixed up with a Park Avenue friend-of-a-friend who was thinking about squeezing parenthood into her busy schedule of Wall Street law and Transatlantic on-again/off-again love affairs with Mr. Maybe; we’ll get back to the part  where I binge traveled to Eastern Europe and the Middle East before New Year’s Resolution-ing myself into a winter of book writing; I’ll breeze right over my cyber courtship with Kris & Tracy, and how when we first met I had to ask them “Do you like me?” because they liked me so much they could barely speak to me; I’ll fly right by my Porter flights to Ottawa for our home science project with the artichoke jar and the Big Lesbian Handbook to Being Fertile & Getting Pregnant; and get right to the part where I completely, unexpectedly, fell in love. 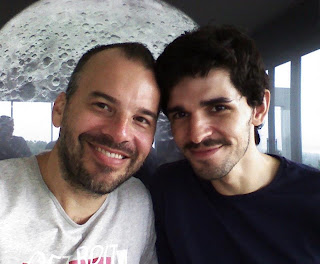 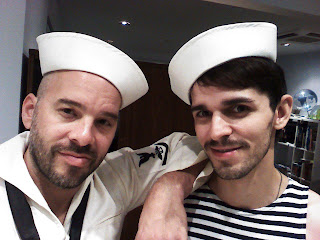 When people ask how Raff and I first met, the short answer we usually give is “on the beach in Rio.” It’s the perfect cocktail-party answer, being about all the explanation a typical light conversation can handle, and it’s entirely true, just leaving out the four months of online courtship that preceded it.
Backing up to September of 2010, I was in the midst of a fertility-focused regimen every bit as intense as what I imagine med students go through before entrance exams, or how athletes must train for the Olympics (even curling). The Irelands and I had made two attempts already at baby making, and between ovulation windows, I followed all the advice the Big Lesbian Handbook had to offer. I worked off the extra empanada weight I’d put on while writing (excess pounds slow sperm production), took a daily dosage of zinc and L-vitamins (count uppers), and - very importantly - abstained 100% from sex, for the safety of all concerned.
Now, nothing’s more charming and popular at the gay bar than saying, “I’d love to go out with you, but I’m saving all my sperm for a nice lesbian couple in Canada.” So I took a break from even worrying about boys and dating for a while. It’s amazing how different the mind works, how relaxed a person can feel when the pressure is completely off. Somewhere inside, I think I took this time to prepare for all the changes that were on the way, that I was setting about to make happen.
Still, I’m a social person, not a total monk. So I took to chatting online, and that’s how I met a tall, lanky Mormon surfer who was taking time to ponder the sky in Santa Cruz, California, while his friend attended school there. We shared an interest in modern surf music, the Drums and Hacienda in particular, and let the sparks kindle from there. If absence makes the heart grow fonder, abstinence turns it into an avid suitor, a good old-fashioned gentleman caller. We enjoyed a proper long-distance courtship, complete with playlists (the modern “mix tape”) and Valentines and a glossary of private nicknames, enough to make even Charlotte York gag in a cloud of floating hearts. 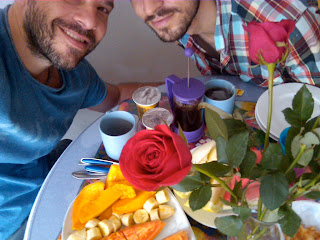 By January, my Olympic Event (baby making) was over, and like a gold-medalist curler, I was back to eating French fries and wearing underwear that hugs. Mac was the size of a chick pea, making his moms up in Canada deliriously happy (and nauseous), and my very minor role in helping to create him was complete. I left the zinc behind and flew to Ipanema, where Raff and I pretty much kicked things off with a honeymoon. Drinking coconuts together at Posto 9 was our way of bringing a U-Haul on a second date (if you don’t understand this reference, Kris will explain).
For the next year and a half, we dated long distance. Neither Raff nor I is a Skype person, or a phone person or an instant-chat person – we prefer email, several times a day. It’s the closest thing to writing a love letter in the modern age without having to go through the ridiculous wait endured by a Gabriel Garcia Marquez character. Then, whenever I booked a freelance job, I’d also book a ticket to Brazil to see him afterwards, both of us content to do what we had to do in the meantime, to go with the flow, to “play it by ear.” This was a new phrase for Raff - “PIBE,” he called it for short, and being someone who’s grown up between Brazil and Iceland, drifting off to pass a summer surfing in Spain, or to breathe the air in Greenland or feel the majesty of India, he’s a natural at PIBE.
Our new year’s resolution for 2012 was to bring our dashing LDR to an end and, one way or another, get married and live together in the same city. But where would we live? How could we both work? Should I learn Portuguese and move to Brazil? Should we go to Italy and get green cards for the EU, taking advantage of Raff’s Italian heritage? Would now be the time to settle in Toronto or Montreal, closer to Mr. Mac? Or was there some way Raff could get a visa to stay in New York, where my job opportunities are the best? (Marriage in the US still doesn’t count for these purposes).
PIBE.
So when I landed a full-time job at an ad agency in New York, Raff moved up to join me. While I was busy working on “Go Olive Garden” commercials, he was busy becoming a New Yorker, deciding on a favorite neighborhood (Soho), discovering bagels, bumping into the likes of SJP, Lucy Liu, and Glenn Close walking her dogs. On weekends, we flew off to meet my family, meet my cousins, meet Kris and Tracy and Mac, to see Fire Island and Mason, Ohio, and loll around the Hamptons and the North Fork. I’ve never been more pleasantly exhausted in my life. By the end of September, we moved to the couples’ paradise that is gentrified Brooklyn, and a very new chapter of life is well under way. Special Guest Star has his own show. 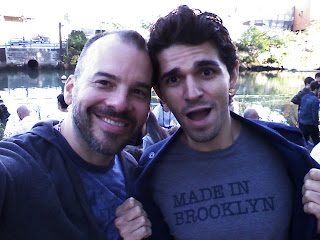 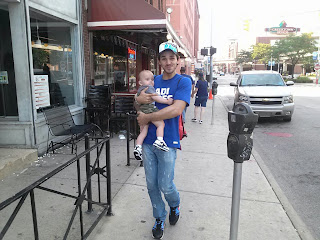 Admittedly, some people are better at PIBE than others. Last weekend, as we prepared to leave for Brazil, Sandy made her way up the coast, threatening to crash our wedding plans. I stressed, completely forgetting the wise advice my mom has had taped up on her refrigerator since her days as a school nurse: “Worry is a misuse of the imagination.” Would our flight be canceled? Should I call TAM airlines, which is every bit as laidback and Brazilian as Raff, and try to pre-arrange a back-up plan in a race against other canceled passengers? What if there are no buses to JFK? Will we miss our wedding in Brazil entirely and have to swim to City Hall instead?

As the wind howled and I paced, anxious that the windows would blow in, Raff lounged on the sofa, surfing Youtube and making a honeymoon playlist. “Relax,” he kept saying, agreeing with my mom’s advice. “We’ll leave Wednesday.” 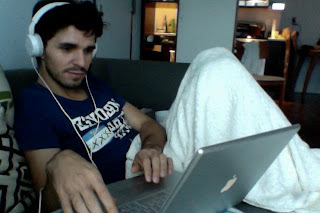 Not much ever stresses Raff out, actually. In fact, I can think of only three things that get his cuecas in a knot: the closing credits on a TV show (too long!), multiple hashtags on a tweet (decide!) and ‘noisy sheets’ (I can’t sleep with this sound!). Otherwise, he’s about as easygoing as it gets, always one to take time and appreciate the power and beauty of a walk, or a nap, a bath, an apple, the sky. “I’m a simple boy,” he likes to say, while spreading imported caviar on his breakfast bread.
Sure enough, we left Wednesday. As I took a deep breath, too tired to figure out our bus route across the outer boroughs to the airport, a gypsy cab spotted our luggage and pulled up to offer us a ride. Rolling through Queens, four hours early for our flight on a beautiful fall afternoon, I took Raff’s hand and smiled. “I told you,” he smiled back. “Relax.”
The next morning, we were already relaxing at his mom’s house, visiting with the family and drinking mango juice. In a few days we’ll marry at the local Cartorio, where earlier this year, Raff went in to consult with a woman, dressed head to toe in vintage Chanel, on what we’d need to make it official. “Passport, birth certificate, a Brazilian tax payer ID number,” she told him. “Just that - and the desire!”
Raff’s mom will be our witness, and his father, Octavio Candotti, who used to say, “a family without a gay is not a family,” will be watching over us from above. We’ll take his mom to lunch and then leave for our honeymoon at the beach. At Christmas, we’ll toast our nuptials with my family, and think about what to do for a reception in the spring in New York. We’ve talked about getting married four times in total, once for each element, on four different continents, and having four different rings, one for each occasion (Raff believes in accessories). We can celebrate as often as need be, bringing the party to our friends and family wherever they are, hopefully starting with a visit to the Irelands in early December. There are no rules or expectations, really. We are free to PIBE.