Sometimes good things happen to those who don't wait

We have celebrated almost a decade of Christmases together. My wife and I. And every year, somewhere around December 14th, we find ourselves sitting on the floor in our PJs, drinking wine, and opening all our gifts. We have never once made it to the 25th with presents from each other left to open.  We are impatient and curious people. That's just our nature.

Actually, I should be a little more honest. That's MY nature. The second I have my presents bought and wrapped (which usually happens a few days after I see that all of my presents from Tracy are bought and wrapped) I start suggesting that we should open them all. She'll ignore me for a few days. But I'm like a chip in the windshield that starts to spread. And she's just like the window - both will eventually crack.

So, when it came to choosing a donor/father for our child I really struggled with the idea of not knowing the guy. One day we were scanning profiles from the sperm bank. Which, quite frankly, is the strangest online shopping you will ever do. We decided that we would only look at "open" profiles which  meant that when our child turned 18 he/she would be allowed to contact the donor (although we were told that we wouldn't know in advance if the donor would be interested in forming a relationship with our child or simply exchanging a single letter).

It wasn't, at all, that I thought that using a known donor would be a better choice. That decision has turned out wonderfully for my family but it involves a significant amount of risk (for all parties involved) and google will tell you that it often turns out horribly wrong. If we hadn't found our Andy we would have absolutely gone the sperm bank route. And, trust me, I know from experience that there are not enough Andys out there to go around.

But if I couldn't wait two weeks to open a GPS system, a homemade gift certificate for a massage that doesn't seem to actually ever be valid, and a box of wine, then how on earth was I supposed to manage waiting 18 years to know more about where 50% of my child's DNA came from? The thought of it made me itchy and panicky.

Tracy was open to the idea of using a known donor/father but her deep sense of skepticism meant that she was doubtful that we could find someone she could trust enough to let him take such a vital role in our family. And as the non-biological parent she knew trusting another person to play the role that she so wished she could play in the creation of our family would be a big leap.

As you know, it was love at first email with Andy and we've counted our blessings every day since I took that first risk and hit send.

Last weekend we made the trip to Cincinnati to spend some time with Andy's family and childhood friends. At some point I stopped trying to count my blessings because there were just too many. I was on the verge of tears most of the weekend as my heart swelled with joy watching my son, his father, and the rest of his extended family interact. Even now as I write this my keyboard is wet with tears.

Mac often takes a while to warm-up to new people and since it has been almost a year since his last visit with the Halls I assumed he would be pretty stand-offish. But within minutes of being there he had latched onto Andy's dad, Bopa to Mac, and was busy helping him feed birds and inspect the grounds. Bopa had so much patience with his little apprentice. Even with a sore hip (scheduled to be replaced this summer) he crouched down to let Mac "help" with his grown-up tasks. Something as simple as carrying a patio umbrella across the yard gave Mac such a sense of pride. And as I watched them together I made a mental note to myself to slow down and let Mac "help" more often. 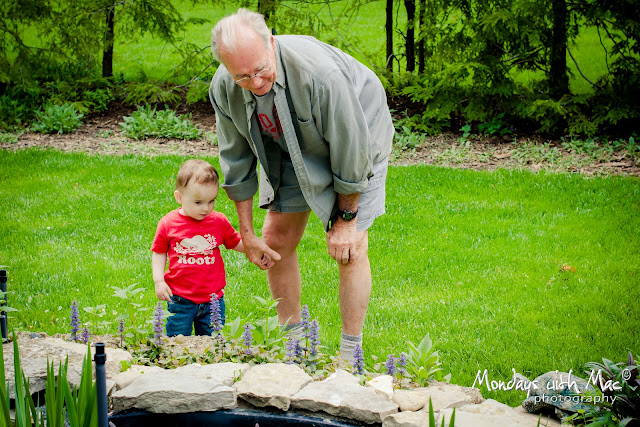 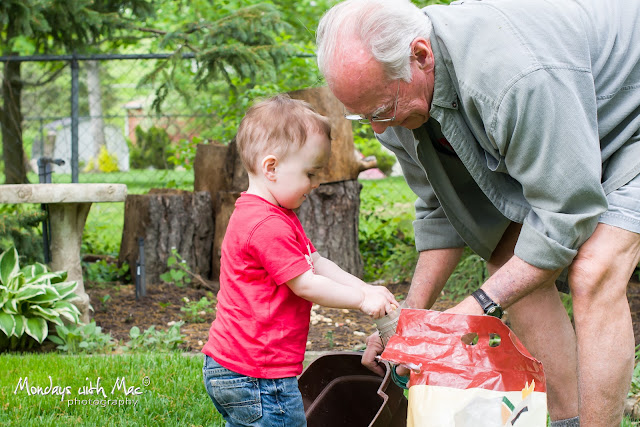 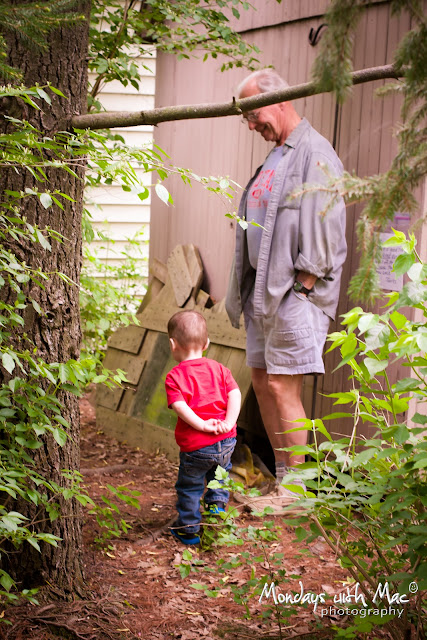 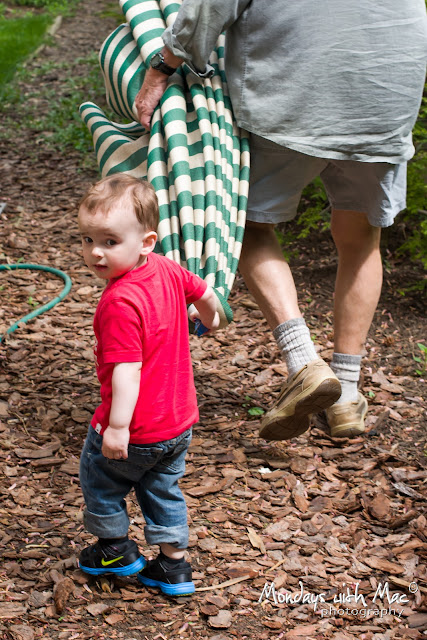 I always enjoy watching Andy and Mac interact but those visits are usually on our turf. It was so sweet to watch Andy introduce Mac to his hometown friends and family.


And I know y'all are waiting for the pictures of Andy and his mini-me. 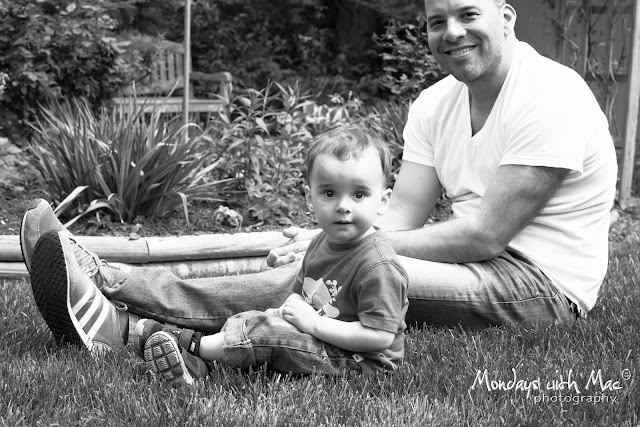 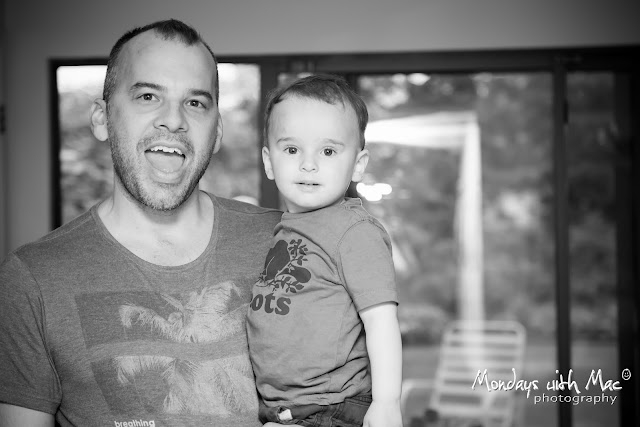 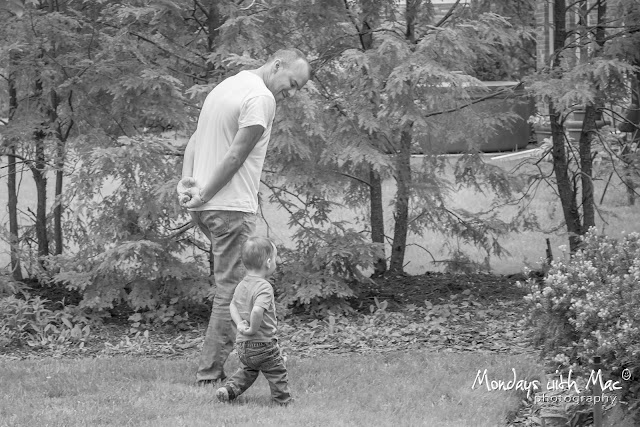 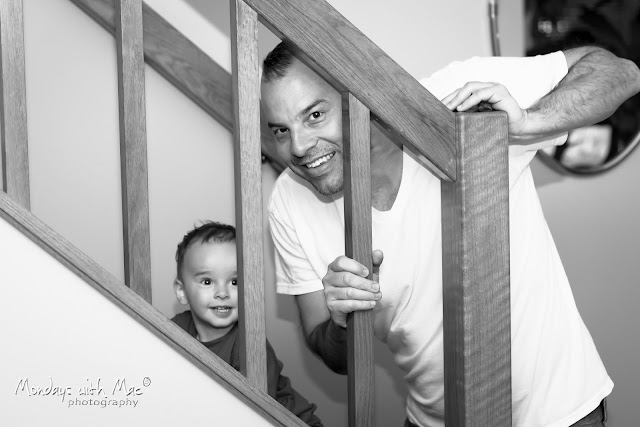 Tracy and I watched as Mac slipped seamlessly into this family like he had always been there. And we followed along behind him finding our place too.


Some people are patient. They can let beautiful gifts sit wrapped under the tree and wait to open them when the time is right. But spending time with Andy's family made me realize that I'm glad I'm not one of those people.