The year after a pregnancy is often spent reminiscing about this time last year.  New parents remember the highs and lows of bringing a new life into the world (at least when they aren’t changing diapers, rocking babies, and wondering if they will ever sleep again). Parents can be heard saying things like this time last year we saw two beautiful solid lines on a home pregnancy test, this time last year we were sharing the good news with everyone, and eventually culminating with this time last year we were welcoming our son/daughter into the world.
We have done a lot of that this year. As fall approached we reminisced about the joys of those early days when the pregnancy was confirmed. We remembered the magical feeling of walking around with a big secret. OMG I’m growing a person right now!  And then a few weeks later I remembered when 'cracker' was a curse word. As we entered the holiday season we remembered the excitement of sharing the news. Our extended family didn’t know we were trying to get pregnant so the ultrasound picture left a few open jaws.  And now, as March settles in, we remember the scariest month of our lives.
The weather was warm and spring was on its way. My belly was growing large and I was anxious to be rid of winter coats so that strangers would come up and rub it (yes I’m probably the only pregnant woman who loved that part). 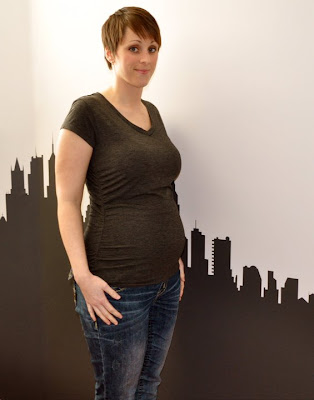 I was on my way home from a visit with my parents when I knew things weren’t right. I’ll spare you all the details and just say that for the last hour of the drive we were rushing towards the hospital. I rested my hand on Tracy’s as she drove. Neither of us talked much. The lack of colour in her face was only outdone by the stark white of her knuckles.
Twenty-two weeks. It’s too early isn’t it?
Lets just get to the hospital.
Later, at the hospital, legs spread under the florescent lighting, my mind refused to imagine the possibilities and instead focused on the fact that I hadn’t shaved my legs in days. Doctors and nurses came in and out. Some talked to me. Others talked to each other. It was an orchestrated dance and they were well practiced. I thought about how strange it would be to have a job that saw people at their best and at their worst. Did they discuss their day over dinner with their spouses?
How was your day dear?
Two miscarriages and three live births. And the vending machine was out of Twinkies
My two main doctors left and came back with a third. She was slightly older and it was instantly clear that she was in charge. The first two stepped back and let the new one speak. It seemed to be a two for one exchange. She was the big gun. That couldn’t be good.
He’s very early. Sometimes they can survive. But there is not a lot that we can
do to encourage that outcome.
Are you telling me that I’m loosing him?
I’m preparing you for the possibility.
Tears welled up in my wife’s eyes but her jaw steadied her face. She blinked them back and reached for my hand. The round disk of the contraction monitor bounced on my belly. Mac was irritated by the intrusion and was trying to kick it off. I covered it with my hand imagining that I was holding his tiny hand in mine.
Hold tight my precious little one.
I’m fine Mama. Do you feel me? Kick kick, punch punch. I’m here. I’m OK.
We settled into our hospital room. Tracy curled into the fetal position on the cot next to my bed. Her body was stiff and seemingly weightless as if the tight clenching of her muscles was enough to suspend her over the mattress. By comparison my body was heavy and outstretched. I felt calm. My hand rubbed and patted my round belly communicating in secret code with the baby inside.
He’s fine. I know it.
Ya, I’m sure he is. She said without believing it.
Morning came and with it more doctors and more nurses. More ultrasounds and more blood tests. More rushing and more waiting. 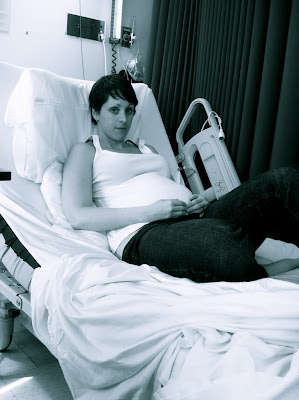 And then, finally, the doctor with the clipboard. He was called in to read the results of the many tests. He was apparently only handed the clipboard on his way into the room because he stood ominously over my bed for what seemed like an eternity while he read it.
Everything looks normal. Bed rest for a week.
We returned home a little stunned. Fergus was still with his Auntie Tata and the house was quiet.
Do you need me to stay home with you tomorrow?
No I’m fine. Go to work.
Except that I wasn’t. In the moment of crisis my body had shifted into survival mode. My inner Mama knew that I needed to stay calm to protect him so I did. My heart didn’t race and I didn’t cry. I was steady. But at home all of those emotions that I had deferred came rushing in with a vengeance. We were post-trauma but the stress still needed to surface. Tracy had felt the fear, full force, at the hospital but it dissipated as the doctor lowered his clipboard and assured us all was fine. But as she started to feel better, I started to feel worse.
Did you rest today?
What do you care?
Huh?
I can’t believe you went to work today. Our baby almost died.
But he’s fine. And you told me to go.
It’s like you don’t even love us.
It took me weeks to process what had happened. And the experience marred the rest of my pregnancy. Every twinge, every pain, every quiet hour devoid of kicks, all seemed to bring me right back to that place of absolute fear.
This time last year we were struggling. I was scared and Tracy was confused. Bed rest afforded me far too much time to think. I imagined what it would be like to loose the baby we hadn’t even met yet. Would we recover? Would she blame me? Would I blame myself? Was that a kick? I should drink some orange juice.
But this time last year we could have never imagined what would be in store of us at this time THIS year. Nobody could have prepared me for the joy I would feel seeing my son smile so big that it hardly fits on his face. 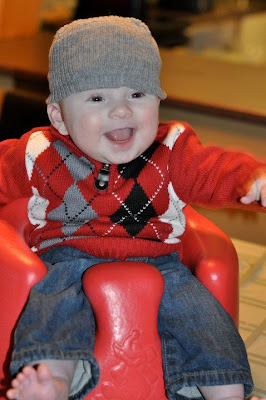 And I had no frame of reference for the feeling of picking him up and having his arms wrap around my neck in a hug. This time this year is pretty spectacular. And now I am wondering what will be in store for us this time next year?