Mac's Auntie Tata has a hard time receiving gifts. Buy her a coffee and she won't be able to relax until she has returned the favour. You might even find her suggesting a second cup immediately following the first so that she can "repay her debt" and begin to relax. We laugh at her when she does this. But the truth is that the desire to reciprocate in gift giving is nearly universal.  Sometimes we can find a way to return the gift immediately. The slate is wiped clean and we begin again. Other times the gift is so large, or so profound, that we have to wait for the perfect time, a fortuitous opportunity, to offer our reciprocation.

Two years ago Andy gave us the grossest and most amazing gift imaginable. An artichoke jar of sperm kept warm in his armpit, passed awkwardly to my wife in the hallway of our home. One needle-less syringe, one set of lady reproductive organs, and nine months later we had Mac. Pushed into the world with deafening silence he eventually found his voice and filled our hearts in ways we could have never anticipated. Twenty-four hours later Andy arrived nervous and excited. Through tears Tracy passed him his son. He held the warm sleepy bundle and smiled. He turned to me and thanked me for growing such a perfect baby. For those first few days the three of us shared in the joy. Mac's existence embodied reciprocal gift-giving as we passed his swaddled body back and forth between us. A little baby burrito shared between three parents. But soon Andy returned to New York City and I couldn't help but feel like we got the better deal. 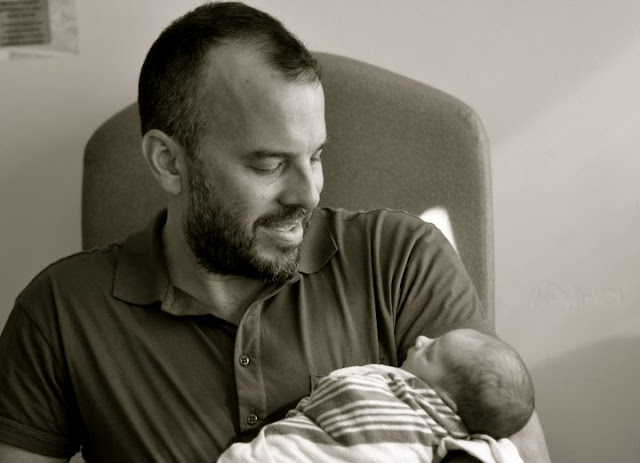 Of course, he didn't give us that artichoke jar for wholly altruistic reasons. He longed for Mac's existence just as we did. But in the end we took Mac home. We got the late night feedings and one million diaper changes. We also got the cuddle sessions and the soft, sweet, smell of the baby's head.

I've often wondered if Andy ever really understood what a special gift that was to give. Does he know that there is nothing we will ever be more thankful for? And if gift reciprocity is an ideal that we hold dear how will we ever find a way to say thank-you?

This weekend Andy left the sweet haze of his newlywed life to visit his son. We warned him that Mac was smack dab in the middle of his tornado phase. Movement is constant and blocks are likely to fly around the room. But we didn't tell him about the eye of the storm moments. Those precious minutes when he transitions from full throttle fast forward to a brief pause. The Holy Grail of a parent's day. Nap time.

We never really succeeded at getting Mac into a crib. Partially because whenever we tried he seemed enthusiastically opposed to the idea. But also because when his body is still and sleeping he reaches his little hands toward the body lying beside him and snuggles in. He finds the sweet spot where your neck meets your shoulder and he burrows his little head right in. And if you don't reach your arm over to pull him in for a tighter cuddle he will grab it for you. It's pure magic.

We encouraged Andy to settle in for nap time with promises of warm baby snuggles. He jumped at the chance. Two hours later the boys emerged from Mac's room with sweaty hair matted to their heads, rubbing sleepy eyes. 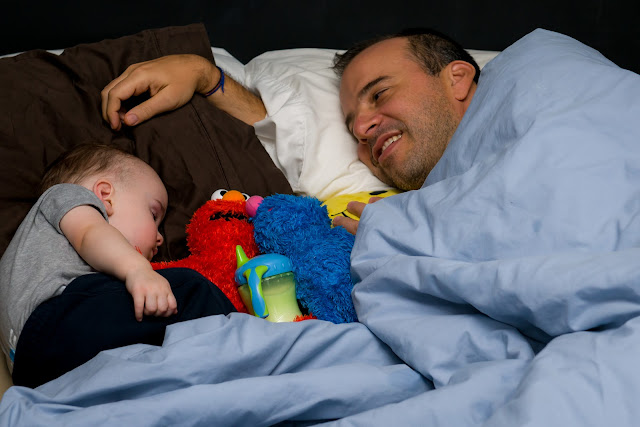 "Thanks for that," he whispered with a grin. "That was such a gift."
"I know," I responded, meaning more than I could really express.